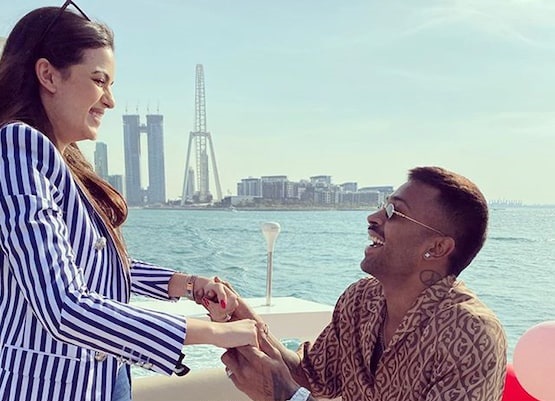 Yesterday, on the occasion of New Year, Indian cricket team’s all-rounder Hardik Pandya announced his engagement. Hardik Pandya engaged with a Serbian actress and model named, ‘Natasha Stankovic’ at the beach on the first day of 2020. The duo exchanges ring and then they kissed each other on a small private ship in the middle of sea.

Hardik Pandya took to social media to post a photo of himself and Natasa Stankovic in which the actor can be seen wearing her engagement ring.

In another video posted by Natasha on Instagram, Hardik Pandya can be seen proposing to his girlfriend and the couple ends with a lip lock.

Natasa, who appeared in DJ’s Babu song, is soon to become Hardik Pandya’s bride. From cricketers to Bollywood stars and all those associated with cricket, they are wishing them for this new innings. Indian cricket team captain Virat Kohli also congratulated Hardik and Natasa by commenting on the Instagram post of Hardik Pandya.

Apart from Virat Kohli, Shreyas Iyer and all the cricketers have congratulated him for the engagement. Mumbai Indians have also commented on the post, for which Hardik Pandya plays IPL.