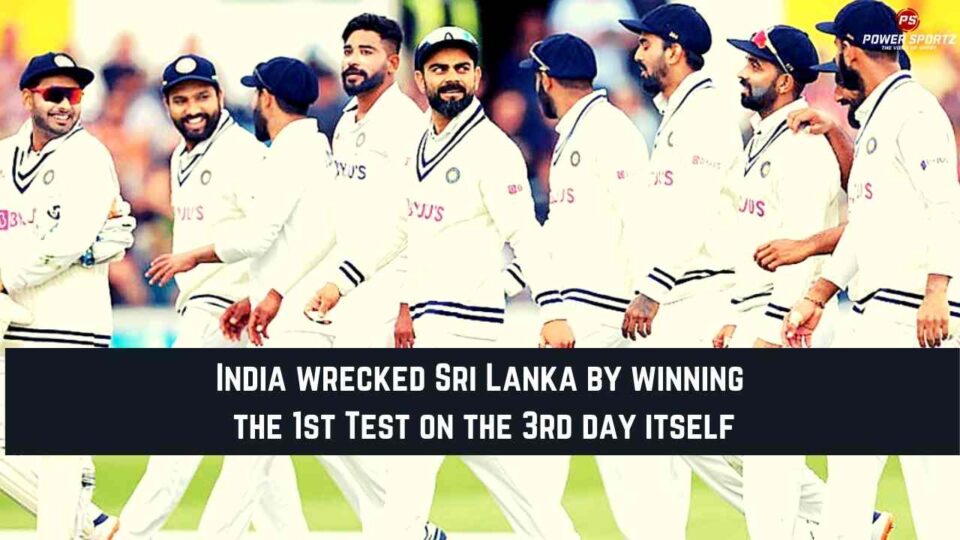 India ticked all boxes against Sri Lanka to register an initial lead in their ongoing 2-match Test series. The 33-year-old Indian all-rounder, Ravindra Jadeja turned out to be the star performer of the match.

The persistent Indian attack overpowered Sri Lanka on the third day of the Mohali Test, taking 16 wickets to take a 1-0 lead in the series. Ravindra Jadeja concluded with a 9-wicket haul to go along with his 175 runs with the bat in a convincing victory.

Jadeja’s five-wicket performance, his first in Tests since 2017, kept Sri Lanka in check despite squandering a 400-run first-innings lead. R Ashwin, who surpassed Kapil Dev’s 434 Test wickets to go into second place on India’s all-time list, started the fall in the second.

For the second time in the contest, Lahiru Thirimanne was caught at slip by Ashwin, while Pathum Nissanka, the first innings half-centurion, got a thin edge and was caught behind. Mohammed Shami got one to shape away and trap Dimuth Karunaratne LBW for 27 runs, demonstrating how brilliantly the pacers complemented the spinners.

The Lions struggle was finally put up by Angelo Mathews and Dhananjaya de Silva, who put on a 49-run stand. But Jadeja snuffed it out once more, catching de Silva at short cover and then trapping Mathews LBW with a powerful turner. Between them came Ashwin’s 435th wicket, which came when Charith Asalanka edged to slip.

In the second innings, Sri Lanka’s lower order fought back with an unbeaten 51 from Niroshan Dickwella, but the finish felt nigh with a wicket always on the horizon. Rohit Sharma switched to Shami, who got Vishwa Fernando caught behind for a duck, leaving Jadeja with only one chance to become the first cricketer to score 150 runs and take ten wickets in the same Test. But it was not to be, as Ashwin finished the innings by catching Lahiru Kumara in the deep, inflicting Sri Lanka their third-worst Test defeat.

India won by an innings and 222 runs over Sri Lanka: Post Match Reaction

“To me, he is one of the top (allrounders) definitely. Look at the performances. To score 175 not out and take nine wickets in the game, he’s just upping his game every time. In the past as well, his contribution with the bat lower down the order and taking those crucial wickets (amazing). You know, he just seems to be adding a lot more to his game every time he plays. He’s very hungry, as you can see. That hunger is something that drives athletes to move forward. I see that in Jadeja clearly. He’s quite hungry for success, for runs and do well for the team.”

“He has really come a long way in the last four-five years. I think his position is a little low for the way he is batting at the moment. That’s what I think,”

“His batting has gone one notch higher. He knows what he is doing and it reflects in the way he is batting.”

When and where will will be the 2nd Test ?

India have earned themselves and the Sri Lankan team, 2 days extra rest by finishing the 1st Test in just 3 days. Meanwhile, the 2nd and final match of the series is set to commence on the 12th of March.

The fixture will be a day-night Test cricket action starting from 14:00 IST. While the match is going to take place at M. Chinnaswamy Stadium in Bangalore. Thus, India will be keeping an eye on that top spot in the ICC World Test Championship.