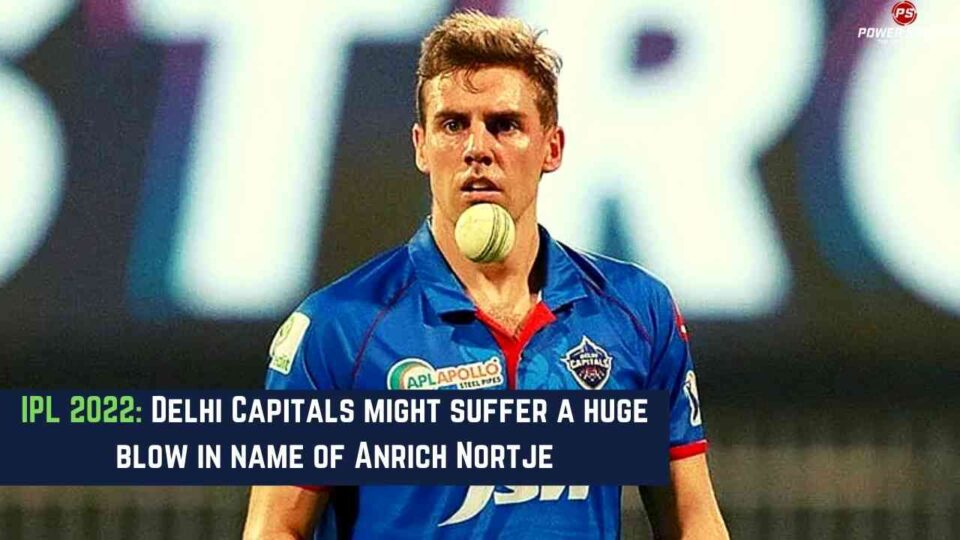 Delhi Capitals are set to begin their IPL 2022 campaign against Mumbai Indians on 27th of March and they are going to miss the services of their leading pacer, Anrich Nortje.

According to the reports, the South African fast bowler might miss partial or full IPL season concerning his hip injury. Thus, DC will have to look for a substitute to replace their premier pacer. However, CSA’s selection convenor, Victor Mpitsang has not completely ruled out the possibility of Nortje playing in the later part of the tournament.

“It’s probably going to be difficult [for Nortje to go to the IPL]. He has not really been bowling much since November. We don’t have any timeframe on his return. It’s been a long one. The medical team will give advice on whether he will be cleared for the IPL,”

Nortje was one of the top bowlers for the IPL 2020 finalists Delhi Capitals in the previous two editions. The Capitals kept four players, Rishabh Pant, Prithvi Shaw, Axar Patel, and Anrich Nortje, who would earn INR 6 crores in the forthcoming season, before the blockbuster auction. Nortje has 34 wickets for DC in 24 IPL games, with an economy rate of 7.65.

Nortje has also been left out of the African squad for the 3 ODI series against Bangladesh, which will be contested in Centurion and Johannesburg from March 18 to 23. It will be difficult for him to involve in the IPL 2022, which begins in less than 3 weeks, according to CSA selection convenor Victor Mpitsang.

The 28-year-old following suffering hip difficulties after the T20 World Cup 2021 in the UAE, Nortje hasn’t played cricket in the last four months. Moreover, he missed the home series against India and the overseas Tests against New Zealand due to a “chronic” hip issue.

Nortje’s route to obtaining the appropriate fitness has also been “frustrating,” according to CSA Chief Medical Officer Dr. Shuaib Manjra.

“He is currently being investigated. He has been seen by three different orthopedic surgeons. He is struggling with loading and doing most of the other rehab work. He is not ready for the Bangladesh series. We don’t know about the IPL. I guess it’s frustrating. He keeps fit, he works extremely hard. All goes fine, except for when he picks up his bowling loads. He has got discomfort. We have identified three different problems between back and hip and we don’t know which is primary,”

Thus, it is going to be a difficult task for the Capitals to replace a player of his calibre. Delhi will kick off their new campaign under the leadership of youngster Rishabh Pant. While it remains to be seen who ill DC choose as Nortje’s deputy if is ruled out of the tournament in the coming days.