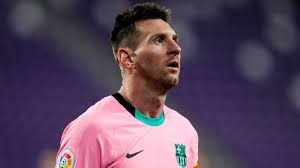 Argentina star Lionel Messi says that he will decide upon his future with Barcelona during the summer. Even last season there were too many guesses of Messi leaving the club for good and it created a lot of furor in the transfer market. Also it resulted in an acrimonious relationship between the player and the club administration.

Messi came very close to exiting Nou Camp after handing in a transfer request in the summer but somehow he reluctantly decided to stay at the club. Barcelona’s former president Josep Maria Bartomeu demanded that Messi’s €700m release clause had to be met for him to leave.

Now that he has made his decision public, Manchester City and Paris Saint-Germain will be likely interested in signing the legendary Argentina forward.

On the other hand, Messi is interested in playing in the United States in the MLS.

“Nothing will be crystal clear before the end of the year. I’ll wait until the season is over,” Messi said during an interview.

“What matters now is thinking about the team, finishing the year well and not being distracted by other things.

“I don’t know what will happen. I’m focused on what we have here and battling for whatever we can.

However, Messi refused to divulge much about his next potential club. Yet, given his close friendship with Paris Saint-Germain forward Neymar, people may think it is the club he will see himself in the next few years. At the same time he also expressed his interest to play in Major League Soccer one day.

“I’m not thinking about how the year will end. As of today, it wouldn’t be wise for me to say what I’m going to do because I don’t know.”

On the speculations of a potential reunion with Neymar at Barcelona, Messi said: “It’ll be difficult to bring in players because the funds aren’t there. We’ll have to bring in plenty of top players to get us competing on all fronts again and they come at a price. Neymar would be extremely expensive.”