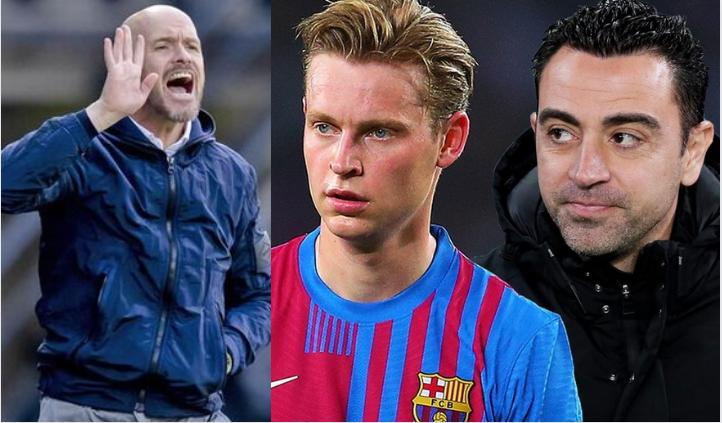 Out of all the top 6 clubs in the Premier League, only Manchester United are the only team who are yet to make a signing. And now they are closing on completing the signing of Barcelona midfielder Frenkie de Jong.

Richard Arnold and John Murtough, two prominent members of Manchester United, have gone to Barcelona. In order to resolve the impasse surrounding the club’s pursuit of Dutch midfielder, Frenkie de Jong, 2 senior figures of the club have now travelled to Spain.

The 25-year-old is the top summer transfer target for brand-new manager Erik ten Hag. However, a legal dispute involving De Jong and Barcelona is impeding any prospective agreement.

The issue revolves around De Jong’s pandemic-era earnings that must be paid back over a four-year period. De Jong postponed collecting the money in order to assist the struggling Catalan club.

And the money was supposed to be reimbursed over the duration of a new, four-year deal that is about to go into force. Given what he feels he is owed by Barca, De Jong is hesitant to leave the Spanish giants.

United has repeatedly emphasised that, should their efforts to capture the former Ajax player not be successful, they have backup plans. The eagerness to sign De Jong is highlighted by the decision of chief executive Arnold and football director Murtough to fly in for in-person negotiations with Barca officials.

Normal circumstances would have had at least one of them in Thailand for Tuesday’s preseason opener between United and Liverpool.

Thus, it now seems like de Jong might be on his way to Old Trafford very soon.

While this is going on, it is known that the two might meet with De Jong in an effort to persuade the 25-year-old to transfer to Old Trafford despite his wish to stay at Camp Nou.

“You are always flattered when teams show interest in you as a player,” De Jong also told reporters in June. “But I think I am at the biggest club in the world at the moment and feel fine there so there is no news.”

Man United is reportedly willing to spend £56.2 million upfront for the midfielder, with additional money coming in through add-ons.

De Jong still has four more years left on his Barcelona contract, but the Catalan club is rumoured to be eager to offload him in order to complete additional transactions this summer, with Robert Lewandowski of Bayern Munich and Raphinha of Leeds United also top targets.

Joan Laporta, president of Barcelona, recently asserted on two consecutive occasions that the Netherlands international is not for sale, casting doubt on the proposal.