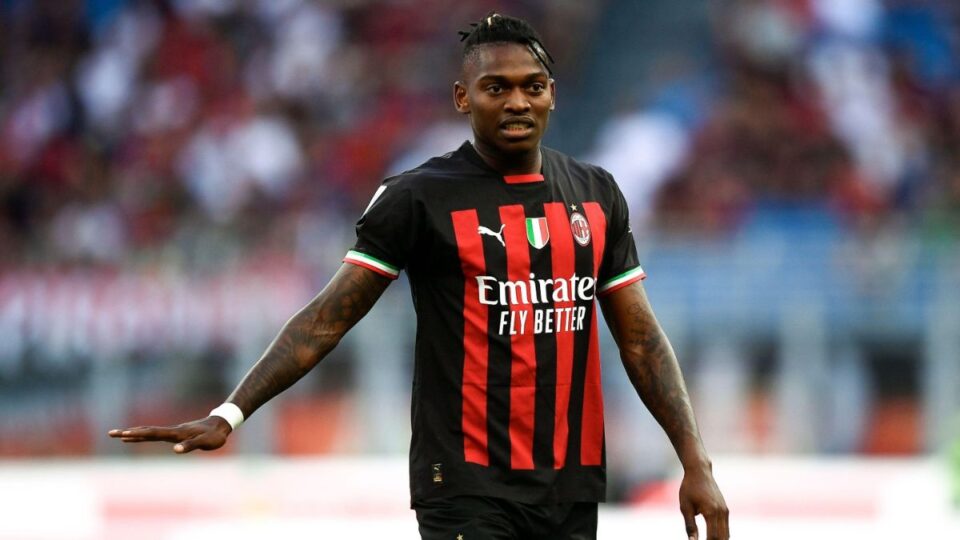 According to reports, Manchester City is getting ready to compete with Chelsea for the services of AC Milan forward Rafael Leao. At the start of the 2022–23 season, the 23-year-old has been in excellent form for the Italian champions, scoring three goals and registering four assists in seven games across all competitions.

Leao, who was heavily linked to Chelsea throughout the summer, had a good 2021–22 season with his Serie A team, tallying 14 goals and 12 assists in 42 games across all competitions.

Leao’s release clause of €150 million (£130 million) is thought to have prevented the Blues from acquiring him, with their late-period bid of €80 million (£69 million), Milan had previously indicated that he would not be available for that amount.

Gianluca Di Marzio, an Italian journalist, claims that Man City and Chelsea are both interested in signing him. Chelsea is rumoured to be aiming to rekindle their interest in him in the coming year.

The Portugal international, who might leave San Siro in 2023, is allegedly a major admirer of Citizens head coach Pep Guardiola, according to Di Marzio. Stefano Pioli, the manager of Milan, recently stated that the Serie A powerhouses intended to extend a new deal to Leao soon.

“The club wants to offer Leao a new deal soon. They will take care of it – he’s working at the best level. He’s not creating any problems, he’s just working hard as a top professional,”

Who will win the race to sign Rafael Leao?

According to a recent rumour, Leao and Milan’s contract negotiations have reportedly halted because of the player’s £6 million annual demands.

“In order to improve, you need talent and intelligence, so Leao has both of those. We gave him the time and freedom to make mistakes so he could learn,”

Pioli said when questioned on Leao after Milan’s 3-2 win over Inter Milan earlier this month.

“Naturally, every time we put him in one-on-one situations, he’s an important weapon in our armoury. Rafa has a body language that might confuse people, but I can assure you he knows what potential he has and is very eager to learn.”

Thus, this gives an opportunity to other clubs to pursue his services in the winter transfer window.

The Portuguese player has been a member of Milan since August 2019, appearing 122 times for the team in all competitions while contributing 30 goals and 25 assists.

With the acquisitions of Julian Alvarez from River Plate and Erling Braut Haaland from Borussia Dortmund during the summer transfer window, Man City strengthened their attack.

But there were also a lot of departures throughout the summer, including the free transfers of Raheem Sterling and Gabriel Jesus to Chelsea and Arsenal, respectively.

When Man City hosts Borussia Dortmund at Etihad Stadium on Wednesday night, they will be attempting to make it two straight victories in the Champions League.