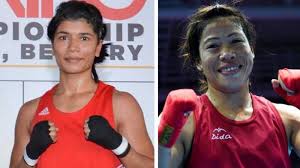 Amid all the fracas of a trial between Mary Kom and Nikhat Zareen, as the former gets an unchallenged entry into the Olympic qualifiers, Mary Kom has come out saying that she is not scared to fight Zareen. “It would just be a formality to beat her,” said Kom.

To this, Nikhat took serious offense and since then fighting against the rule. She has written to the Sports Minister to intervene. Mary on her part said, “The decision has been taken by the BFI. I can’t change the rule. Whatever they decide, I will go with that.”

About her equation with Zareen, Mary Kom said, “I have beaten her several times in the past. It is only she who keeps challenging me.”

The latest is, BFI has called for a selection committee meeting next week to discuss the matter.