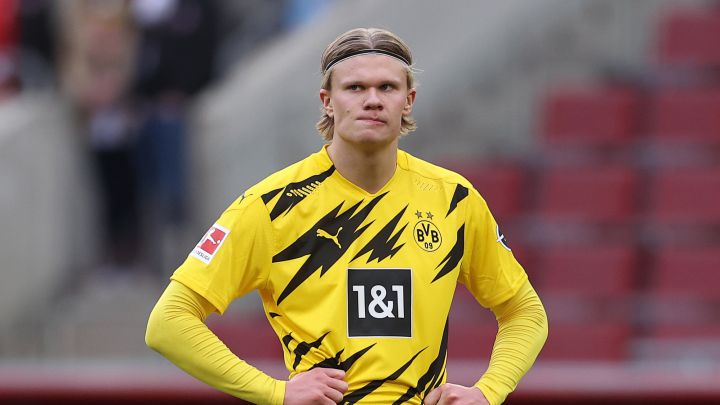 Erling Haaland might be playing one of his last few seasons in Germany with Dortmund. The Norwegian striker is rumoured with a move to Manchester. Both Pepe Guardiola and Ole Gunnar Solskjaer have been impressed by the showstopper and are expected to try and sign him. Recent reports suggested that Manchester United have identified him as their primary transfer target for the upcoming transfer window. Other reports hint that Manchester City have identified him as a replacement for Sergio Aguero who joined Barcelona in the last summer transfer window.

Haaland has been prolific in the Bundesliga; he has managed to provide 62 goal involvements in 48 matches. In the 2020-2021 Champions League the striker played a significant role for his side by providing 10 goals and 2 assists in 8 games. Despite having a contract which is to expire in 2024 he has been in the radar of many teams. Many European clubs such as Real Madrid, PSG, Manchester United and Manchester City have shown interest to sign the striker. However, none of these clubs haven’t approached the player till now.

In the upcoming transfer window Haaland could join an English club.

This is just the start to the Norwegians career who has a market value of 150 million euros. The 21 year old has the potential to become one of the best strikers in the near future. Despite, having a depleted transfer market due to the outbreak of the coronavirus Dortmund willing be looking to attain more then 200 million for their superstar. In addition to the transfer fee the German side might add a buy back clause to his transfer. The German side won’t sell their superstar if they don’t get the valuation they are looking for.

‘The Terminator’ has not hinted or showed any intention to leave Dortmund as of now. Nonetheless, rumours will continue to revolve around this superstar. Where do you think Haalands future lies?