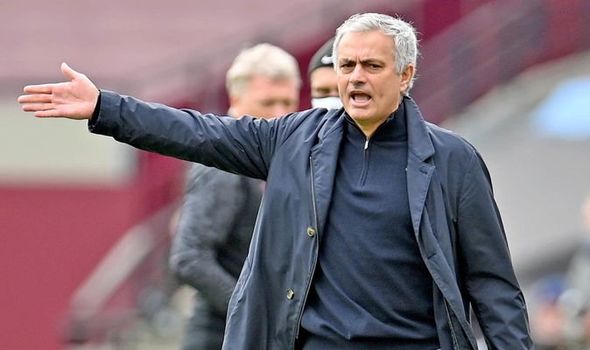 After facing a lot of flak since his side slipped to their fifth Premier League defeat, Tottenham boss Jose Mourinho came out in support of his coaching staff and vehemently defended his coaching techniques. Spurs have gone down five times in their six games so far, the latest against West Ham United on Sunday.

Jose’s boys are now nine points off the top four after ceding 2-1 victory to West Ham and their miserable form continues in the league.

Mourinho is still confident of reaching the top four spot after the match, but he did admit “there are problems” at the club.

For Tottenham, their season depends on cup form, with Spurs in the final of the EFL Cup and still in the Europa League. Mourinho is looking at succeeding there, but after another defeat, despite a late rally and hitting the woodwork twice, Mourinho appeared resolute after the match.

When asked whether there is any gap in his coaching methods, an animated Mourinho said, “No, not at all. The results are the consequences of multi-situations in football. Mine and my coaching staff methods are second to nobody in the world.”

Mourinho also declined claims that the team was in crisis but admitted there is “frustration and sadness” in the changing room, and said they are having a “bad run of results.”

“And if that light comes back, it is different. You hit the post and the ball goes inside or goes outside. The VAR decisions, many times, I am not speaking about today because today I didn’t watch, but many times are controversial, or are decisions by one inch.

“You sometimes also need a little bit of luck to go in your favour. I believe that if this team wins a couple of matches in a row, that the situation can change, and that we can still fight for the top four. Of course if you say nine points now, it is difficult, but it is very possible.”

He wanted people to take home the point that Spurs are a great team and they will bounce back in time.