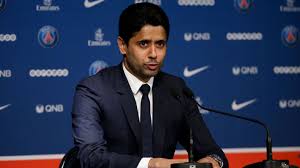 Nasser Al-Khelaifi, the head of Paris Saint-Germain, and Jerome Valcke, the former vice-president of FIFA, were both called to prison on Tuesday for their roles in a World Cup TV rights deal by the Swiss public prosecutor.

The findings rendered in favour of the two individuals following a trial in 2020 that resulted in Valcke’s sentence being suspended and Al-acquittal Khelaifi’s are being appealed by the Swiss government.

And now, Nasser Al-Khelaifi, the president of Paris Saint-Germain, has once more been exonerated in the corruption case. And this time the Qatari businessman is involved in the World Cup broadcasting rights.

The 48-year-old was accused of paying former FIFA Secretary General Jerome Valcke between €1.4 million (£1.2 million). In addition to that Al-Khelaifi was also accused of paying €2.3 million (£2 million) to give beIN Sports the TV rights to the 2026 and 2030 World Cups.

Al-Khelaifi allegedly gave Valcke exclusive access to a villa in Sardinia, according to the Swiss Federal Court. Although the Paris St Germain president was first cleared of those charges in October 2020.

The prosecutor requested a 28-month prison sentence against the beIN Sports chairman when the case was reopened on appeal earlier this year. Meanwhile, Al-Khelaifi has now been exonerated once more.

“Today’s verdict is a total vindication after a relentless six-year campaign by the prosecution which ignored both the basic facts and the law at every turn.”

“Our client has once again for a second time been fully and completely cleared.”

“The years of baseless allegations, fictitious charges and constant smears have been proven to be completely and wholly unsubstantiated, twice.”

While a third defendant, Konstantinos Nteris, received a 10-month suspended sentence. At the end, Valcke was found guilty by the jury and given an 11-month suspended prison sentence and fine.

In the summer of 2003, as beIN was negotiating the extension, Valcke reportedly asked the Qatari for assistance in order to purchase a lavish property in Sardinia.

The mansion was purchased by Al-Khelaifi for five million euros ($5.85 million) through a business that was quickly transferred to the brother of one of his close associates before it was made available to Valcke, according to the prosecutor.

The two men claimed the arrangement was “private” and unrelated to the agreement beIN and FIFA reached in April 2014, and they denied any wrongdoing.