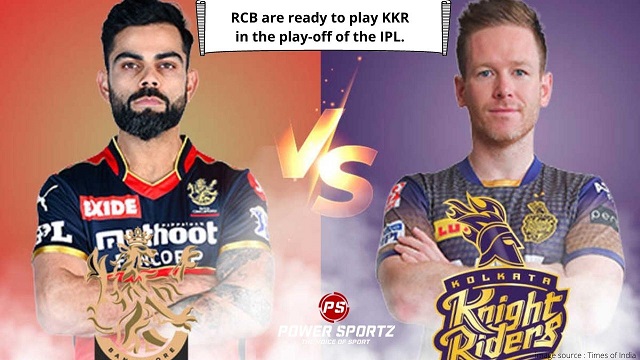 RCB enter this match after beating DC in an encounter which came down to the last ball of the game. Srikar Bharat scored a 78 not-out against the league leaders and was awarded the man of the match. Bharat will have replicate such a knock to help his team beat KKR. In addition to Bharat, captain Kohli will need to lead from the front and add more runs on the board. The skipper has not been phenomenal in this IPL an has been able to score 336 runs in 14 matches.

The leading wicket taker in this IPL Harshal Patel is also expected to give KKR a hard time. The fast bowler has been able to take 30 wickets in 14 innings. Skipper Eoin Morgan will needs to guide his Indian batting unit from the front in order to be victorious. His batting unit consists of Shubman Gill, Venkatesh Iyer, Nitesh Rana and Rahul Tripathi; This Indian unit needs to be guided in a tactical manner to prevent falling in trap set up by RCB. Both Chahal and Siraj are eager to prove their critics wrong and will at their sharpest in this match.

KKRs chance to win the match will increase significantly if they are able integrate Andre Russell back into their side who had picked up an injury while fielding against CSK early this season. The 33 year old was instrumental to the teams success when they beat RCB in a significant manner by 9 wickets and won the match in the first 10 overs.

Captain Virat Kohli will have vengeance on his mind and will be determined to act on the mistakes that occurred the last time the teams played each other. This matchup is going to extremely interesting, who do you think will win and take their team one step closer to the IPL title?