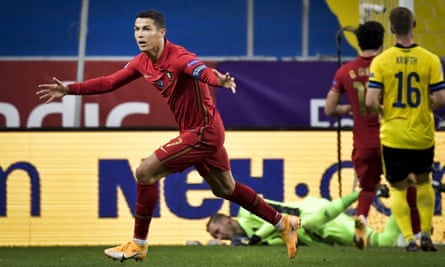 Portugal’s star player Cristiano Ronaldo scored his 100th international goal with a fantastic first-half free-kick against Sweden and another spectacular effort in the second half to clinch a 2-0 win in Nations League in Stockholm.

With two wins from two games, Portugal is at the top of Group 3, ahead on goal difference of France, which beat Croatia 4-2, with the Swedes third and the Croatians bottom.

Ronaldo is only the second male footballer to record a century of international goals and is now just eight behind the record holder, Iran’s Ali Daei. Ronaldo’s first goal for Portugal came in the opening game of Euro 2004 against Greece.

The 35-year-old Juventus player remained a constant threat to Sweden’s defence. It further became difficult for the hosts when Gustav Svensson received his second yellow card for a reckless challenge on João Moutinho. Ronaldo stepped up and scored a dipping free-kick beyond the dive of Robin Olsen and just under the crossbar.

Ronaldo followed that up with another curling, striking in the 73rd minute – this time from open play. Portugal’s Joao Moutinho lauded the Swedes for making it difficult for them early on, but everything changed with the dismissal of Svensson. “Of course the red card was good for us, we tried to circulate the ball to find spaces, and happily we scored two great goals from Ronaldo,” he said.