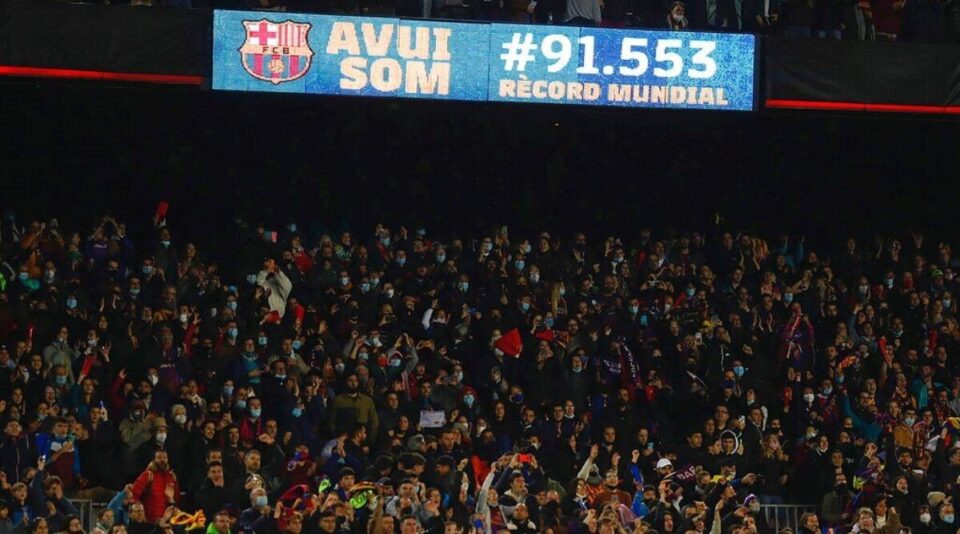 On Wednesday, the 91,553 fans in the Camp Nou stands registered a record attendance for the Women’s Champions League quarter-final second leg between Barcelona and Real Madrid made history.

The game drew the largest crowd ever seen at a women’s football match. It outnumbered the 90,185 who watched the 1999 World Cup final between the United States and China.

Fans of Barcelona and women’s soccer, in general, had a day to remember. It can be considered a huge success for the world of women footballers. Many women around the world can get the desired motivation from the game. Thus, it is a great sign for the world of football as a whole. Hence, it shows the power of this beautiful game that is truly no more a gender-biased game.

About the record attendance game at Camp Nou

The weather in Barcelona improved before and during the play after a dreary start to the day. Thousands of spectators, including many women and children, cheered the Blaugrana as they arrived into the stadium, waving flags and scarves and boosting the players with shouts and generating a tremendous atmosphere. The fans greeted Real Madrid with thunderous whistles.

Despite the fact that there were various festivities planned surrounding Camp Nou, fans queued up early in the evening to access the stadium.

The crowd never stopped supporting and boosting their players throughout the game. The players’ seven goals on the pitch contributed to the Catalans’ 5-2 victory in the second leg, which followed their first-leg victory.

A mosaic, a light show, and numerous chants were among the attractions. At the conclusion of the game, the home players were given the opportunity to walk around the stadium to express their gratitude to the people who had come to watch.

The previous best-ever attendance for a club match was 30,814 at the Estadio Wanda Metropolitano in 2019 for the LaLiga Iberdrola match between Barcelona and Atletico Madrid.