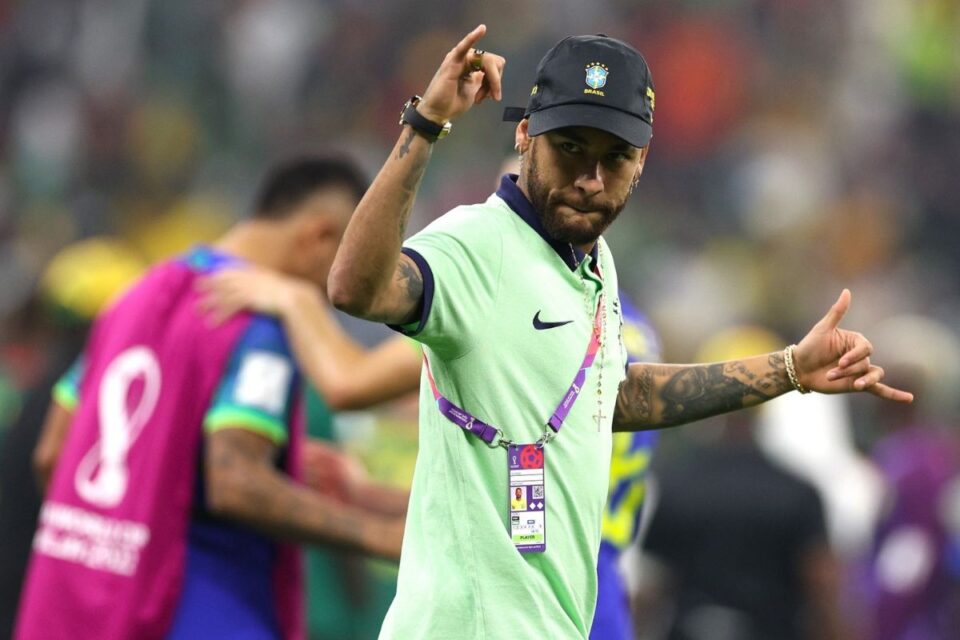 Star forward Neymar will be available to play in Brazil’s World Cup 2022 last-16 match against South Korea on Monday. After sustaining an ankle injury during the Selecao’s opening victory against Serbia, the 30-year-old was unable to participate in the team’s remaining two Group G games against Switzerland and Cameroon.

After scans confirmed that the Paris Saint-Germain star had suffered ankle ligament damage, there were immediate concerns that Neymar might miss the remainder of the competition in Qatar.

Rodrigo Lasmar, the team doctor for Brazil, gave a positive update on Alex Sandro on Saturday. Sandro missed the match against Cameroon due to a hip issue, while Danilo is also making a good recovery from an ankle injury.

“Regarding Neymar and Alex Sandro, we think we have time on our hands and there is a possibility,”

“Let’s wait what their transition will be – they have still not started to train with the ball and it’s something they will do tomorrow. It will be important to see how they respond to this new style, so depending on that, we will make a call.”

Both Selecao players, Danilo and Neymar, who have both been battling fevers, have recently participated in first-team practice and are scheduled to play against South Korea at Stadium 974.

At a pre-game press conference on Sunday, Tite was accompanied by captain Thiago Silva. When the defender was asked if teammate Neymar would be able to play, his manager simply responded, “Yes!”

Despite Tite’s optimism, the 61-year-old manager later said that the attacker’s condition will be carefully evaluated and that if he makes it through training without incident, he will play on Monday.

“Regarding Neymar, he’s going to train this afternoon and if he is OK, he will play tomorrow,”

“I don’t share any information that is not true. My answer is he will practice this afternoon, if everything goes well, he will play.”

Neymar can break Pele’s record while playing against South Korea

In the all-time scoring records for Brazil, Neymar, who had injury issues at the last two World Cups, is just two goals behind Pele (77), a national hero, while Danilo is just three appearances away from earning 50 caps for the South American powerhouses.

While Gabriel Jesus and Alex Telles have been ruled out of the tournament due to knee problems, Alex Sandro has not yet returned to training and is still questionable for Monday’s game.

The news of Jesus and Telles’ injuries was a “sad moment,” according to Thiago Silva, but he is happy to see how well Neymar, Danilo, and Alex Sandro are recovering from their own issues.

“We are very clear. Yesterday, before training, I confess that it was a very painful moment to see the boys in that situation of not being able to be on the field with us again,”

“The sadness is there, but at the same time our road continues, also for them. It’s the way we can comfort their hearts by playing our part.”

“I hope they recover as soon as possible. Those who are coming back, we hope to count. It’s good to see Danilo doing well, [Neymar] on the field, Alex evolving, they will add a lot.”

If Brazil defeats South Korea in the round of 16, they will play either Japan or Croatia in the quarterfinals. Brazil is widely regarded as the favourite to advance all the way in Qatar and win a record-extending sixth World Cup.