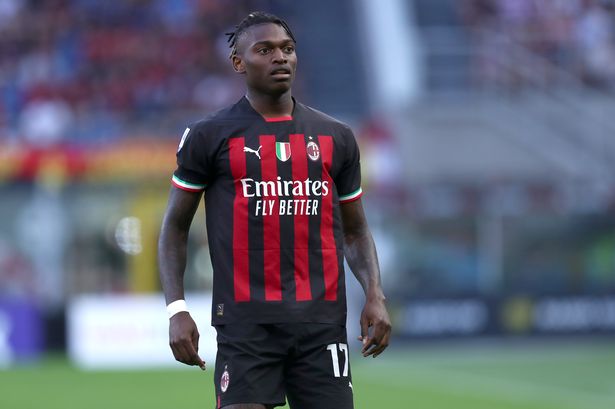 Rafael Leao would reportedly need to be purchased by Chelsea in the final week of the summer transfer window for over €120 million (£101 million). The 23-year-old had a stellar 2021–22 season for his Italian club, making 42 appearances across all competitions while tallying 14 goals and 12 assists.

The Milan giants won the Serie A title for the 19th time as a result of the Portugal international’s 11 goals and 10 assists in 34 Serie A matches. Leao has yet to score in the league this year, but he has assisted his team in earning four points from their opening two games against Udinese and Atalanta BC.

The Portuguese player is thought to be of interest to Chelsea, who are hoping to add at least one new forward to their roster before the transfer window closes.

His San Siro contract is thought to have a €150 million (£127.4 million) release clause, but Calciomercato claims that it won’t be in effect until the last week of the transfer market.

The Blues would then have to bargain with Milan over a transfer cost, and according to the report, they would need to offer at least €120 million (£101 million) to have a chance of landing him.

Stefano Pioli told reporters when questioned on the situation:

“I don’t see any problem with Rafael Leao. He’s not distracted by transfer rumours, he’s focused on working at best level,”

Leao was referred to be “untouchable” by Milan’s sports director Paolo Maldini earlier this year.

Leao has been a member of Milan since August 2019, appearing for the team 117 times in all competitions while contributing 21 assists and 27 goals.

In addition to Timo Werner rejoining RB Leipzig, Chelsea permitted Romelu Lukaku to return on loan to Inter Milan for the 2022–23 season, leaving the Blues without many options in the final third of the field.

Pierre-Emerick Aubameyang, who has lost his starting position at Barcelona this season due to the arrival of Robert Lewandowski, is still heavily connected to Thomas Tuchel’s team.

Chelsea might be forced to look at other possibilities before the transfer window closes because Manchester United is now reportedly in the race for Aubameyang as well.

When the Blues face Leicester City at home on Saturday afternoon in the Premier League, they will be attempting to recover from their 3-0 loss at Leeds United.