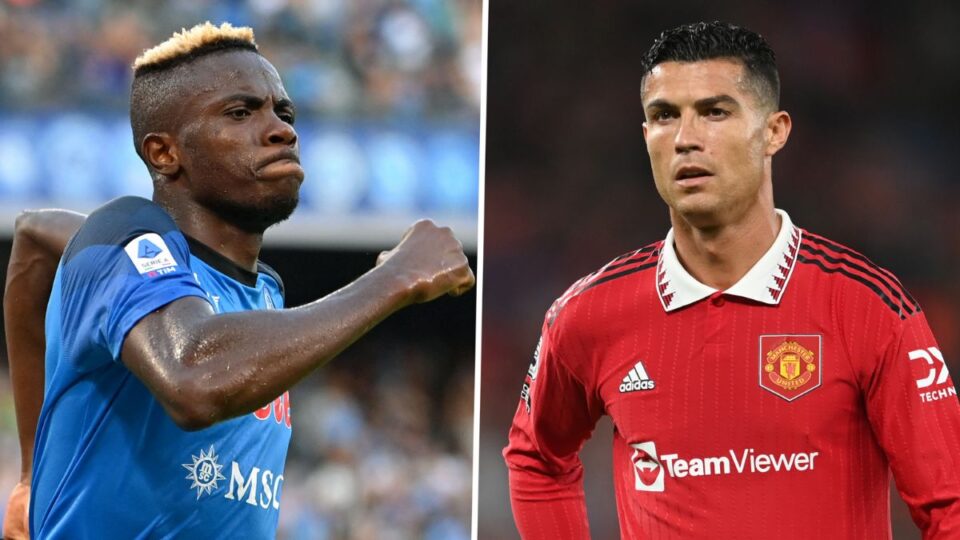 According to reports, Jorge Mendes, the agent of Cristiano Ronaldo, is negotiating a transfer for his client with Napoli that would involve Victor Osimhen moving to Old Trafford. Many people continue to speculate about Ronaldo’s future because the 37-year-old still intends to depart Old Trafford before the summer transfer window closes.

Prior to the deadline the following week, the Portugal international, who was benched against Liverpool the last time out, wants to sign with a Champions League team. Recently, there have been rumours that the attacker would return to Sporting Lisbon, although Man United supposedly downplayed the rumours connecting him to the powerful Portuguese club.

According to a recent rumour, Mendes was in talks with the Italian powerhouses about a potential trade, and Napoli had surfaced as a prospective destination for the seasoned striker.

Gianluca Di Marzio, an Italian journalist, claims that Napoli is willing to loan Ronaldo to them for the 2022–23 season in exchange for Man United paying €100 million (£85 million) to get Osimhen.

According to Di Marzio, Ronaldo’s enormous salary at Old Trafford would also need to be covered by the 20-time English champions to some extent.

In his three Premier League games against Brentford, Liverpool, and Brighton & Hove Albion, the Portuguese has yet to score.

Osimhen, however, has been in excellent form for Napoli so far in the 2022–23 Serie A season, tallying two goals and one assist in two games.

The 23-year-old was in excellent form for his Italian team during the 2021–22 season, making 32 appearances across all competitions while tallying 18 goals and six assists.

Since moving to the Blues from Lille in September 2020, the Nigerian international has scored 30 goals and given 10 assists in 64 games.

Osimhen, who has also been associated with Arsenal, declared last month that he was “quite pleased” at Napoli despite the rumours over his future.

“I’m in Napoli. And I have great respect for my club,”

“They are just rumours of the market. I’m fine here and I’ve never had such close relationships with everyone as at this moment.”

“I spoke to the president, he is the one who decides, and he reassured me by explaining the club’s plans. I am happy with what he told me and the purchases are of quality: words were followed by deeds. I am very happy to play with Napoli and we will see in the future.”

In the closing moments of the summer transfer window, Man United is still after Ajax attacker Antony, although the club supposedly had its most recent bid for the Brazil international rejected.