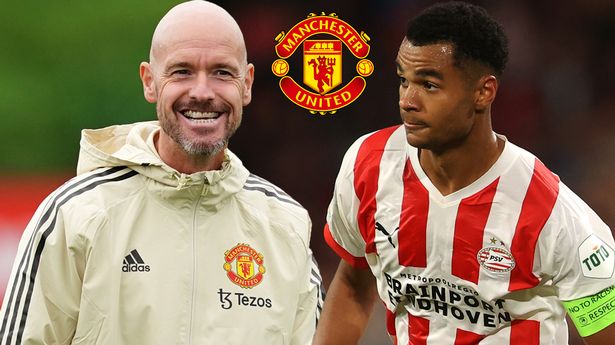 Attacker Cody Gakpo of PSV Eindhoven has acknowledged that, should Manchester United make an offer for his services in the next months, he will give it some thought. The 23-year-old has improved greatly over the previous 18 months while playing for the Eredivisie club.

He has been heavily linked with a move to Old Trafford since the summer. Last season, Gakpo made 47 appearances for PSV in all competitions, scoring 21 goals and dishing out 15 assists.

So far this season, he has contributed 13 goals and 17 assists in 24 games. The attacker from Eindhoven has also performed admirably for the Netherlands in the 2022 World Cup scoring in each of the three group matches against Senegal, Ecuador, and Qatar.

Near the close of the summer transfer season, Man United considered a move for Gakpo but Erik ten Hag’s team ultimately decided to purchase Ajax star Antony for about £85 million. Gakpo, who is contracted to the Philips Stadion until June 2026, has also drawn interest from fellow Premier League teams Leeds United and Southampton.

According to a recent source, Man United is optimistic about signing Gakpo, who is said to be worth around £50 million, in January.

Gakpo has acknowledged that there was some fear when he learned that a deal to the Red Devils had fallen through in the summer, but the Dutchman thinks he is more equipped to handle transfer rumours and will consider a move to Old Trafford if one is made.

“[The summer transfer window] was a tough period. I learned from that. I’m going to do it differently. What comes, that comes,”

“Suppose you want to go from RKC [Waalwijk] to PSV, but that club is not coming. Then you can panic.”

“I thought about Manchester United, but when that didn’t happen, I couldn’t remember. And I started to doubt. Leeds United did come. Should I go there?”

“Now I wait everything. I haven’t heard from Manchester United yet. When they come, I’ll think about it. I also seek the help of God in these decisions.”

In a different interview, Gakpo said he is currently entirely focused on playing for the Netherlands at the World Cup and that choices on his club future can wait until the competition in Qatar is over.

“I have to be honest, I am not thinking about [my future at PSV] now,”

the attacker told The Athletic.

“I am focused on the tournament and want to keep performing well, to keep helping the team.

“Hopefully when we become world champions we can think about other things. I try to keep focused and the other players don’t really speak about that kind of thing.”

Gakpo is anticipated to get the start for the Netherlands against Argentina in the quarterfinal matchup on Friday night at Lusail Stadium.