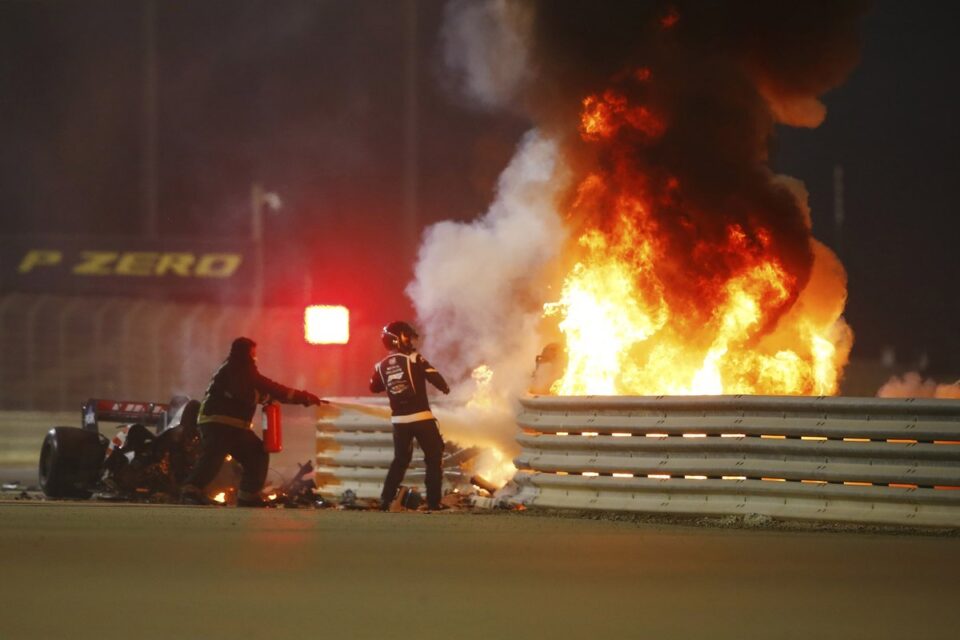 A massive and dangerous accident took place at the Bahrain Grand Prix on Sunday that led to its temporary suspension soon after it started—after the first lap. Haas driver Romain Grosjean suffered a horrific crash that left his car in flames and sliced in two.

The broadcast videos showed Grosjean’s car swerving at high speed into the barriers to the right of the straight barely after two corners into the race.

It was such a great impact that it created a fireball and caused the vehicle to split into two halves. One part with the cockpit flung into the barrier and burst into flames. It was a miraculous escape for Grosjean, 34, who emerged from his cockpit with the help of nearby marshals.

“Romain is doing okay, I don’t want to make a medical comment but he had light burns on his hands and ankles. Obviously he’s shaken… I want to thank the rescue crews who are very quick. The marshals and FIA people did a great job, it was scary,” said Haas team principal Guenther Steiner shortly after the incident.

In a statement released by the FIA read: “The driver was immediately attended to by emergency and medical crews. The driver self-extricated, and was conscious at all times. He was taken to the medical centre before being transferred to Bahrain Defence Force (BDF) Hospital by helicopter where he is undergoing further evaluation.”

Later on, Grosjean was seen talking with the race doctor on television in the medical car shortly after he escaped the inferno. Haas later tweeted that the Frenchman has “some minor burns on his hands and ankles but otherwise he is ok”.

The racer was later shifted to the hospital as a precaution and for further medical investigation.