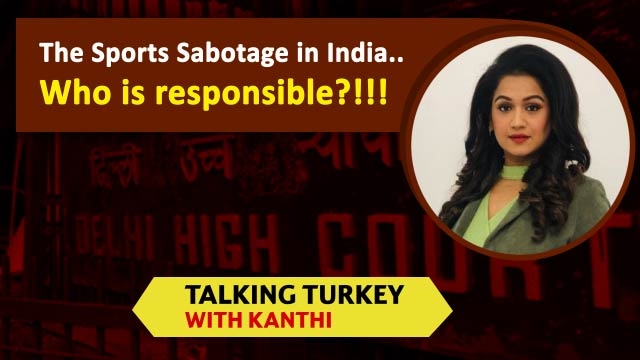 There isn’t anything to be rattled by the news of 54 National Sports Federations (NSFs) de-recognized by the Delhi High Court as it happens time and again in Indian sports. Even the IOA had been suspended in the past, forcing athletes coming from the defunct NSFs to participate under neutral flags.

Every time there is an issue within an NSF, it is a reprise of the same sequence of events when sparks fly and parties reach out to the judiciary as a recourse. Mudslinging, washing dirty linen in public follow suit, leaving the core, which is sports, in the backburner. Athletes, coaches, and everyone linked with sports suffer as a consequence. Has Indian sports handed the reins to the courts to run its routine functions?

This was the topic of discussion in “Talking Turkey with Kanthi” this week on Power Sportz. The sports debate show, which is the flagship program of the channel, tried to investigate what is wrong with the system and why sports is always the scapegoat in this tussle for power within the NSFs. It is a very helpless situation for the athletes, which also leaves the franchises with a deep sense of insecurity, says show-host and Editor-in-chief of Power Sportz, Ms. Kanthi D Suresh.

The clamor for ‘power’ of the officials overshadows the sport and eventually affects our standing in the medals tally in the international arena. So, what are the other ills that plague the system? To get more insight on this, log on to Power Sportz and watch the full episode here.

Far and away icon Dhoni celebrates his 39th b’day

Coming under NADA, does BCCI become an NSF by default