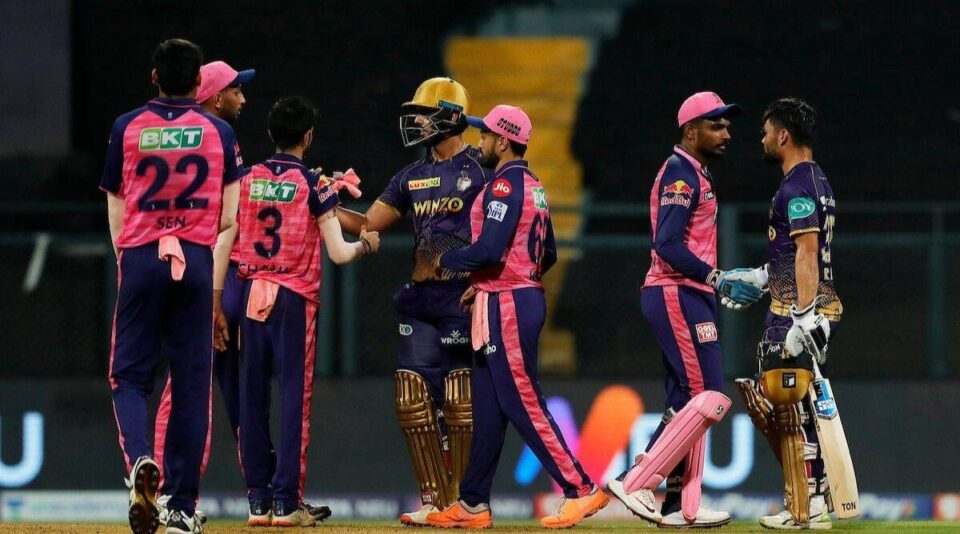 After losing their previous five matches in a row, the Kolkata Knight Riders (KKR) showed some character by defeating the Rajasthan Royals (RR) on May 2 (Monday) in the 47th fixture of IPL 2022. RR did try to put some pressure on the other bowlers during their game. KKR, on the other hand, bounced back in the tournament thanks to some disciplined batting from the two-time winners.

Shreyas Iyer, the KKR captain, won the toss and chose to bowl first. The Royals compiled a decent total of 152 for 5 thanks to captain Sanju Samson’s 54 and Shimron Hetmyer’s unbeaten 27-run cameo.

RR lost opener Devdutt Padikkal for just two runs in the third over, as speedster Umesh Yadav (1/24) took his wicket. Jos Buttler, the wearer of the Orange Cap, who had scored 566 runs struggled to get going and was dismissed for 22. Riyan Parag and Karun Nair, both batsmen, contributed in making their team reach a respectable total. Tim Southee, Umesh, Anukul Roy, and Shivam Mavi took wickets for the Men in Purple.

In response, the two-time champions got off to a shaky start, with openers Aaron Finch and Baba Indrajith unable to get going. However, skipper Shreyas Iyer and batter Nitish Rana batted brilliantly, with batter Rinku Singh providing the final touches.

As a result, KKR snaps their losing run and climbs the points ladder. Meanwhile, Boult, Krishna, and Kuldeep Sen were the most successful bowlers for RR. However, they were unable to do enough to win the match for their team.

RR has now dropped two games in a row. KKR has moved ahead of PBKS in the points table after winning yesterday’s match.

After the match the winning captain Shreyas Iyer said

“Right from the powerplay when our bowlers conceded just 36 runs and took a wicket, it was just the start we needed.”

“I love pressure, but it sweats a lot of me to build the innings in every game. Before the start of the game, I told Mavi, Rinku and Anukul to take the tough positions in the field. Mavi’s catch of Buttler was superb.”

“The wicket was a bit slow, but they also bowled really well but with the kind of batting we had, would have liked a few more boundaries at the end and finish off a bit better. I think we were short by 15-20 runs.”

“We have to keep on assessing the game and who is batting with you, wickets at the wrong time stopped myself to keep on going with the momentum. Wanted to build up the partnership and when I wanted to go hard I think they bowled really well and we couldn’t execute our shots.”

What’s next for Kolkata and Rajasthan?

KKR will lock horns with in-form Lucknow Super Giants (LSG) on 7th May at MCA Stadium in Pune. While RR will take on Punjab Kings (PBKS) in the 1st match of the two taking place on the 7th of May at Wankhede Stadium in Mumbai.