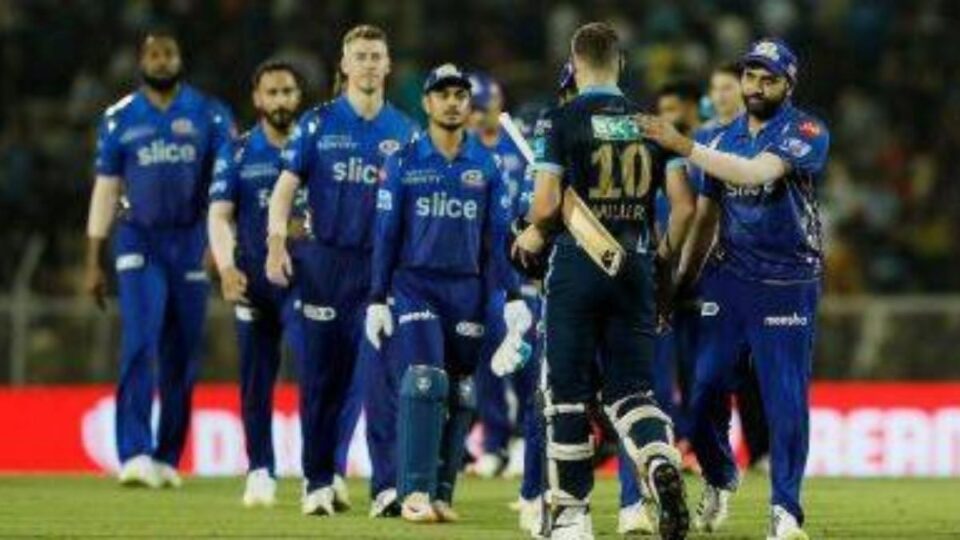 Mumbai Indians (MI) won the last-ball thriller over Gujarat Titans (GT) at Brabourne Stadium in Mumbai, where they are playing the remaining games of the IPL 2022 for pride. MI won their second game of the season by five runs over the most successful franchise of the 2022 season thus far.

Hardik Pandya won the toss and chose to bowl first for an unchanged GT team.

Suryakumar Yadav scored 13 runs, while Kieran Pollard’s dreadful season continued as the Caribbean power-hitter battled with four runs on 14 pitches in his inning. David reminded everyone of his hitting abilities as he led MI to a large total,

Wriddhiman Saha and Shubman Gill put on the greatest opening partnership for GT this season, adding 106 runs while chasing 178.

Both batted to half-centuries before being removed in the same over by Murugan Ashwin. Captain Hardik Pandya scored 24 runs off 14 balls, while Sai Sudharsan could only manage 14 runs off 14 balls and was outstruck losing his wicket.

Daniel Sams bowled wonderfully in the final over to secure his side’s second victory of the season. David Miller stayed unbeaten on 19 runs. GT are still in first place with 16 points, while MI are in tenth place with four points. David Sams was named Player of the Match for his brilliant 44* innings.

After the match the winning captain Rohit Sharma said

“It was pretty tight towards the back end. Very satisfying, something we were looking for all this while. Luck has to turn at some stage, we’ll take that win with both hands. Credit to everyone.”

“We are trying to maintain the same squad how much ever possible. Daniel Sams was brilliant.”

“We’ll take 9 runs in the last over on any given day, but the two run-outs didn’t help us. In T20 cricket you can’t keep losing back-to-back wickets, it pushes you back.”

“It’s one of the games where we ended on the losing side. We kind of played 19.2 or 19.3 overs of good cricket, but losing wickets didn’t help us like I said before. At one point I thought they would post more than 200, but our bowlers did well to restrict them.”

What’s next for Gujarat and Mumbai?

MI will lock horns with Kolkata Knight Riders (KKR) on Monday, 9th May at DY Patil Stadium in Mumbai. While GT will take on Lucknow Super Giants (LSG) the next day on Tuesday at MCA Stadium in Pune.