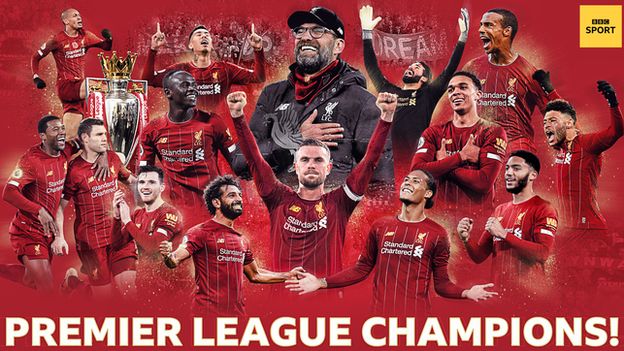 Liverpool became the new Premier League champions without taking to the field as Chelsea edge past Manchester City 2-1 at Stamford Bridge. It’s been a 30-year agony for them when they last won the title in the 1989-90 season.

Fans went berserk as they defied every COVID-19 norm to celebrate this moment which was long hauled. Hundreds took to the streets and literally painting the town red—the fireworks, the cars honking, loud cheers and thunderous applause from everywhere—justifying the interminable wait for this day. Holding the game in an empty stadium held no meaning because the scene outside proved exactly the opposite.

The win, however, was not surprising as nothing could have precluded Liverpool from lifting the title this time with the turn of events since last November when Jurgen Klopp’s boys beat Man City in November. It was followed by dislodging Leicester City on Boxing Day. Then struck the pandemic, blotching every sport across the globe. Probably, this also added to the charm of owning the title.

The players showed some great swagger throughout the season, which more than made up for the morose fans of the last three decades.

Manager Jurgen Klopp was visibly an emotional man in the evening, who dedicated the win to the loyal friends. “It’s such a big moment, I am completely overwhelmed. Tonight it is for you out there,” said Klopp. It was Kenny Dalglish who preceded Klopp winning the title three times for the club. Dalglish was also all praise for Klopp after the win.

“Since Jurgen came in, it has been very positive all the way. He’s been fantastic and he epitomizes everything that Liverpool stands for,” said Dalglish to the media. Liverpool boast stars like Mohamed Salah, Sadio Mane, Virgil van Dijk, among others.