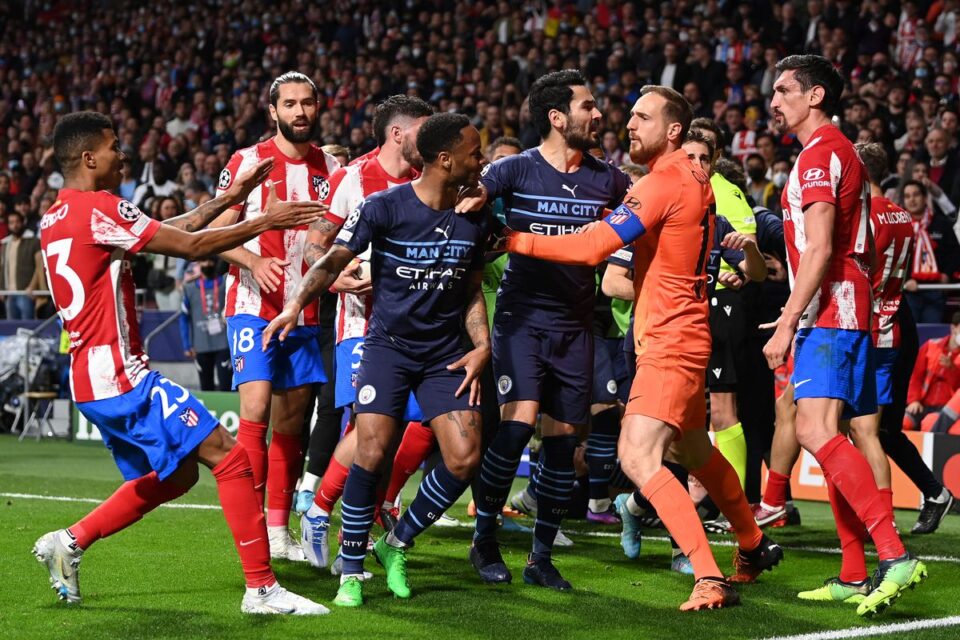 Manchester City made a trip to Spain to face Atletico Madrid for the 2nd Leg of the UEFA Champions League quarterfinal.

The Citizens were coming off from an intense draw at the weekend against Liverpool in the Premier League. While Atletico were low on their confidence as they were coming from a 1-0 loss against Mallorca.

Having a 1 goal advantage in the name of Kevin de Bryune from the 1st Leg, City were reluctant to close the tie in the 1st half itself.

Atletico’s shot-shy performance in Manchester had been criticised, but there was more determination from the start in Madrid. Pep Guardiola’s name was booed, and the taking of a knee was mocked. Despite the hostility, Foden continued to play with a bandage, and City tried to play their natural passing football. The Sky Blues almost scored the game-winning goal when Ilkay Gundogan hit the foot of the post.

After the break, Diego Simeone’s team redoubled their efforts, pushing more players forward and upping the tempo. There were finally some chances created by Atletico with Antoine Griezmann firing just wide of the post.

But, when Felipe was sent out for a second foul on Foden, the job appeared to be done against their desperate opponents. Despite a suspected headbutt on Raheem Sterling and subsequently a hair-pull on Jack Grealish, Stefan Savic managed to stay on the pitch. Despite this, Ederson had to make a stop with all but the final kick of the game to keep Correa out.

Manchester City’s tense goalless draw away to Atletico Madrid was enough to earn a 1-0 aggregate victory in their Champions League quarter-final against Atletico Madrid.

Man City boss Pep Guardiola was released after the match ended and City qualified for their 3rd semifinal in the UCL in the last 7 years. The English champion’s boss said

“In the second half, they were better than us and we were lucky we did not concede,”

“In the first half, we had our chances. Overall, we are in the semi-finals. It is well deserved.”

However, he was worried for the players. Pep further added saying

“We are in big trouble. We cannot forget we played three days ago in a tough game against Liverpool. We have to come here and we have a lot of injuries right now.”

“I am not sure what is going to happen in the next weeks but today we are going to celebrate because it is the third time in Manchester City’s history that we are in the semi-finals of the Champions League.”

Manchester City will now face Real Madrid, who knocked out Chelsea to reach the 2021-22 UCL Semi-final.