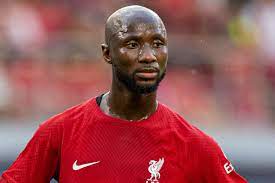 Naby Keita & his contract status at Liverpool is being closely monitored by Arsenal, Chelsea, and Tottenham Hotspur, according to a report. The Anfield powerhouses’ international player from Guinea, who has had yet another injury-plagued season, is set to become a free agent at the conclusion of the current campaign.

As it stands, Keita can thus begin negotiations with international teams in January, despite the fact that Liverpool are rumoured to want to reach an agreement on a new contract with the 27-year-old. When healthy, Keita is allegedly regarded by Jurgen Klopp as an essential element of his team, but before signing a contract, the midfielder wants guarantees about his playing time.

Additionally, it has been stated that Keita won’t talk about a new deal with Liverpool before January. A number of clubs are reportedly keeping an eye on the situation.

According to 90Min, Keita’s contract issue is still a concern for all three of Arsenal, Chelsea, and Tottenham, who are considering their options for signing the former RB Leipzig player as a free agent after this year.

According to the article, Keita’s representatives pressured Liverpool to extend new terms to the pivotal player before the summer transfer market closed and were disappointed when a deal did not materialise.

Will Naby Keita make a switch next summer?

Keita’s camp is aware that the 27-year-old will not be short of offers if he decides to go, and the two parties are currently thought to have reached a “deadlock” in the situation.

Jorginho and N’Golo Kante’s contracts are set to expire next summer, which might result in a massive midfield reorganisation for Chelsea in particular.

Graham Potter disagrees that Kante’s contract issue is of the utmost importance as he recovers from thigh surgery, despite the fact that Jorginho’s agent has stated that talks with Chelsea about a new agreement are a priority.

Meanwhile, Mohamed Elneny of Arsenal, who will also miss a significant portion of the season due to a hamstring injury, appears destined to leave the team when his contract expires in 2023.

The future of Albert Sambi Lokonga has also been questioned, and the Belgian’s departure may prompt the Gunners to look into Keita’s low-risk free transfer.

Keita is believed to have drawn interest from clubs in Spain, France, and Italy in addition to Borussia Dortmund despite his unsatisfactory injury record.

The international from Guinea has 117 games with Liverpool under his belt since 2018, scoring 11 goals and dishing out seven assists, but this season, he has only made one appearance, in the Community Shield victory over Manchester City.

Keita has spent much of the current season recovering from hamstring issues, though he did sit on the bench for the Crystal Palace match in August.

The injured midfielder is anticipated to resume full training this week, but it is doubtful that he will be ready to play in Wednesday’s Champions League match against Ajax.