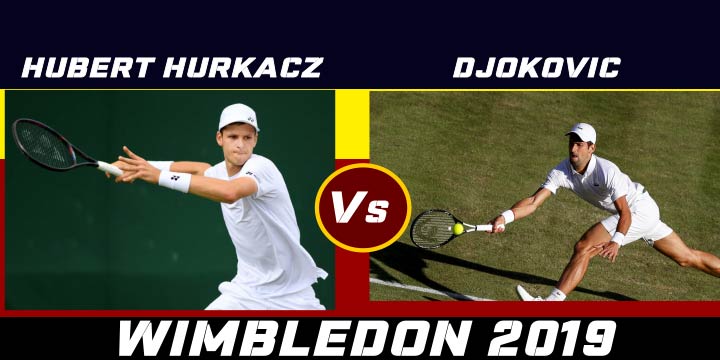 It was not a cakewalk for defending champion Novak Djokovic to enter the fourth round at 2019 Wimbledon, as the World No. 1 was given tough contest by Hubert Hurkacz of Poland. Ranked 41, Hurkacz forced Djokovic to play four sets to advance to next the round. The two of them locked horns only once before at the French Open a month ago. Djokovic beat Hubert Hurkacz 7-5 6-7 6-1 6-4 in a grueling match on Friday entertaining spectators at court 1.

Djokovic broke late in the first set and coupled with some unforced errors by Hurkacz, the Serb went on to clinch the first one. But some stupendous tennis from Hurkacz saw Djokovic give away the second set. However, Djokovic bounced back and snatched the third one dominating the Polish player. Although Hurkacz threw many challenges in the fourth, experience and quality of the highest seed got the better of him and Djokovic ran away with it to win the match.

However, Djokovic was all praise for Hurkacz after the match. “Credit to Hurkacz for playing well. He pushed me. He served well. He attacked the ball mid-court. He gave it all and played a great quality match,” he said.