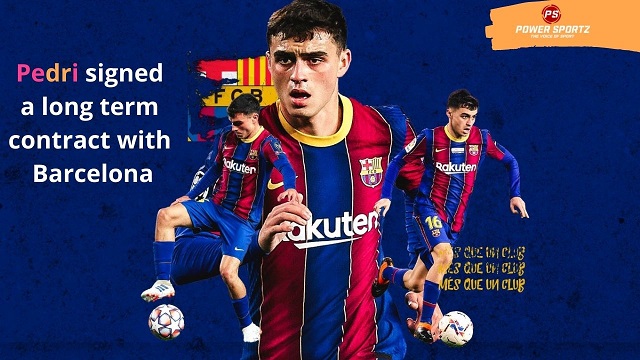 Pedri has signed a new long term contract with Barcelona. The new contract is set to keep the budding midfielder at the Camp Nou till 2026. Over the last two seasons the 18 year old midfielder has become a regular starter for his side and is expected to be integral part of his clubs future. In addition to being a regular starter for Barca the midfielder has played in nearly every game every game for his national team.

Pedri was signed from UD Las Palmas by Barcelona in the 2019-2020 season for 20 million euros. The dynamic midfielder has managed to establish himself as a starter at Barcelona; He was able to feature in 52 games in the 2020-2021 season. Which helped stabilise his teams midfield along with Sergio Busquets and Frenkie de Jong.

Pedri has only played in four games this season as he been sidelined because of a muscle injury. This is because he has been overused by both his club and country over the past few months. Many experts have suggested that Barcelona need to ease him back into the side in order to prevent the player from picking up a long term injury.

Pedri has a release clause of 1 billion euros.

The Spaniard has an estimated market value of around 80 million euros. This value is expected to increase as he is set to become one of the best midfielders of the world in the near future. Barcelona have put a release clause of 1 billion euros for their superstar. This clause has been put in order to fend away any clubs from trying to purchasing their player. Barca will have a bright future if they manage to revolve their squad around Pedri and Ansu Fati.

Do you think Barcelona will be able to win the La Liga title this season?