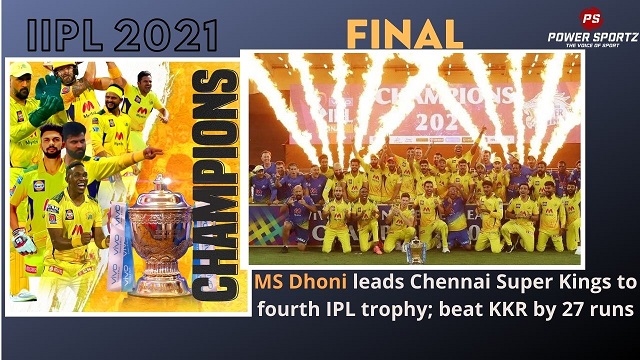 CSK have beaten Kolkata Knight Riders by 27 runs and won this years IPL title. MS Dhoni’s team have been able to win the title after two seasons and have added a fourth title for their franchise. Kolkata Knight Riders will be really disappointed by the manner in which they lost this game. Morgan’s middle order cost his side the game because they weren’t able to form any stable partnership in the game .

Dhoni’s side commenced this game in a splendid manner; Their openers Gaikward and Faf du Plessis established a partnership of 61 runs. The South African batsman went on to score 86 runs and had a striker rate of 145.76. Furthermore, Robin Uthappa and Moeen Ali added valuable runs to their side. KKR’s bowling unit failed to perform; Only Sunil Narine and Shivam Mavi were able to take wickets for Kolkata as CSK established a target of 192 runs.

KKR started the second innings of the match in an efficient manner. Their openers Shubman Gill and Venkatesh Iyer scored 91 runs for their team and put their side in a commanding position. Despite such a great start KKR were only able to add 74 runs to their side in the rest of the innings. This is because Nitesh Rana, Sunil Narine, Morgan and Shakib Al Hasan were unable to establish themselves in the game; These batsman were only able to scored six runs. This eventually lead to Kolkata losing the match in a disappointing manner by 27 runs.

CSK will lose many players in the mega auction next season

Before the start of the next season of the Indian Premier League there will be a mega auction in which all the teams are going to be reshuffled. Reports have suggested that the teams will only be able to retain four players each; CSK will end up losing many players from their current team and will establish a new team.