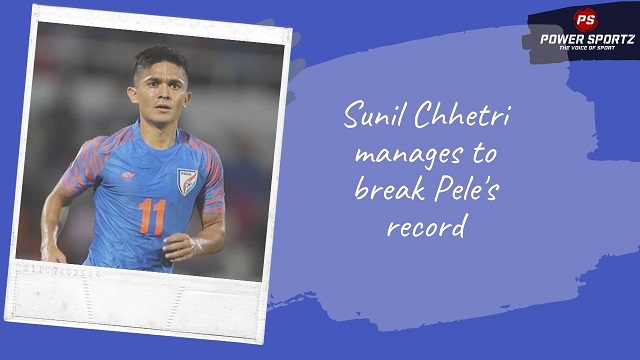 Sunil Chhetri has managed to break Pele’s international goal scoring record; The superstar has scored 79 international goals and is currently the third highest active international goal scorer. Only the duo of Lionel Messi and Cristiano Ronaldo have managed to score more goals then the Indian striker. Many believe that the 37 year old could go past Messi’s goal scoring record of 80 goals over the course of the next few days. This is because India will play Nepal in the finals of the SAAF Championship; Which is scheduled to be held on the 16th of October at 8:30 PM IST.

The Indian goalscoring machine was phenomenal in India’s last match against Maldives; His brace helped India beat Maldives in the semi-finals of the SAAF Championship by a scoreline of 3-1. Chhetri is the leading goalscorer in the tournament as he has managed to score 3 goals in 4 matches. In addition to scoring these goals he has helped guide his team through the Championship without loosing any games.

Sunil Chhetri is expected to retire in the next few years

Chhetri is 37 years old and will retire from international football in another few seasons; India will find it extremely hard to replace their skipper. This is because the striker provides his side with the majority of their goals and assists; There is no player in the team who can replicate such performances on a consistent basis. Experts believe that Indian football will never be the same once he retires as the country will never be able to produce a player of his calibre.

It will be interesting to see what Sunil Chhetri will decide to do after retiring from international football; Many expect him to become a manger for his country and continue to help his country elevate in the world of football.