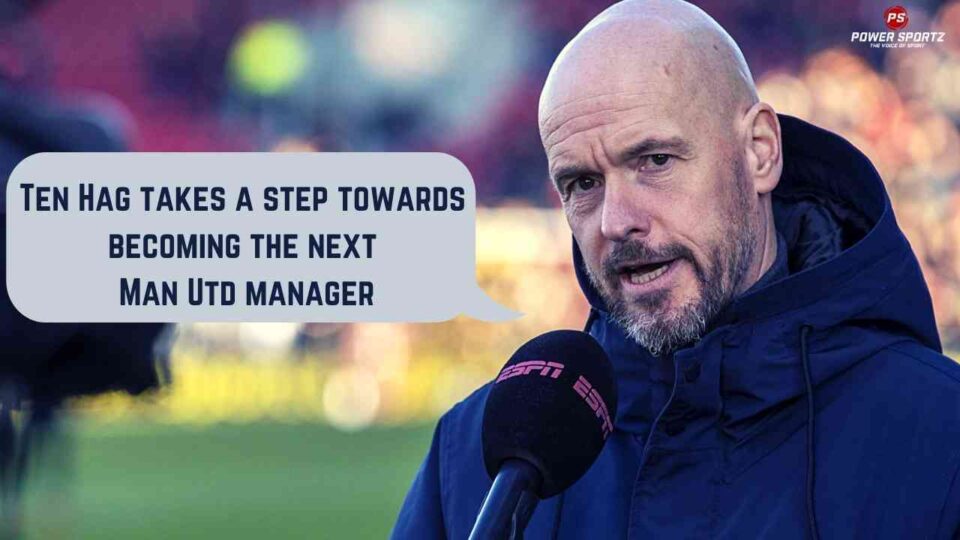 The Current Ajax boss Erik ten Hag is looking forward to taking the necessary steps for being hired as the next Manchester United manager.

After the departure of Sir Alex Ferguson, no manager could be hired to replace him at Old Trafford. It’s almost a decade now since they last lifted the Premier League title. Thus, the Red Devils fans are now concerned about the performance of the club.

Even their living hero’s return in name of Cristiano Ronaldo couldn’t help the English club in finding their lost legacy. Meanwhile, Ralf Rangnick, who is the current interim boss, was thought as the one who can turn things in favour of Manchester United but he too failed to display any real impact.

Thus, it’s high time now that the Red Devils should look for a proper manager before the net season starts. While Ten Hag, along with Mauricio Pochettino, is regarded to be among the leading possibilities to take over at Old Trafford. Although Sir Alex Ferguson has requested the club to examine former Everton and Chelsea manager Carlo Ancelotti as a possible successor.

Moreover, the 52-year-old was in the running to replace Spurs boss Mauricio Pochettino in the summer. But it’s been reported that the language barrier was a stumbling block in discussions with the north London club.

And now, Daily Mail reports that Ten ag is learning English to increase the chances for getting the job.

Is Ten Hag really a good fit for Manchester United?

Following recent internal talks,’ Ajax are said to be aware of Ten Hag’s decision to quit the Eredivisie club at the end of the current season.

But the question is, Are Manchester really looking for him at the moment.

Meanwhile, United’s football director, John Murtough, revealed last week that the club is going through a “thorough process” to find a permanent manager this summer.

“We know that consistency is key as we strive for a top-four finish this season. I want to reiterate however that this is not the ultimate objective for Manchester United, and everyone at the club is focused on challenging for the top trophies.

“We are now conducting a thorough process for the appointment of a new permanent manager who will take charge this summer, with the objective to get us back to challenging for those domestic and European titles”

Currently, Manchester United are sitting at 4th spot in the Premier League table with 47 points in fixtures. However, they have played 2 and 3 matches more than their rivals Tottenham and Arsenal respectively. Thus, it remains to bee seen if Ten Hag is being appointed as the new manager. Although looking at the Dutchmen’s CV it doesn’t seem as things will take a drastic change after his appointment.