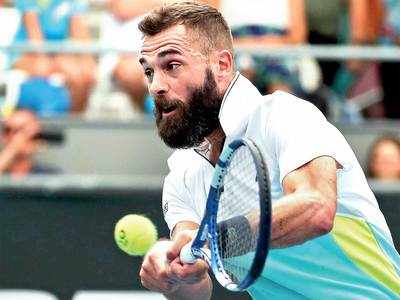 Benoit Paire’s last few weeks have been a roller coaster ride. He was compelled to quit the US Open and moved into quarantine after contracting COVID-19. Although he tested negative in Rome last week, his tests returned positive in Hamburg although his most recent test was negative again.

However, Benoit Paire has confirmed that he was allowed to play at the Hamburg European Open despite testing positive for COVID-19.

It was because the Frenchman is not considered contagious under local rules and hence played Norwegian Casper Ruud in his first-round match, but retired in the second set when he was down 6-4 2-0, complaining of tiredness.

Talking to reporters last week after appearing in the Rome Masters, Paire said, “When I arrived, the test came back positive again, I can’t take it anymore, I’m breaking. And then I’m told, in Germany, if you are positive and have already completed the quarantine [period], they no longer test the players because even if you catch it again, you are no longer contagious.”

“I said ‘thank you’ to the doctor and the tournament [organizers] for allowing me to play. In Paris, some are negative but since the coach tested positive, they cannot play. Here, in Germany, you test positive and you can still play.”

Rules that would apply in the upcoming French Open would be different. If anyone tests positive, there will be outright elimination from the tournament.

Six players in Roland Garros in men’s and women’s qualifying draw were withdrawn this week after either testing positive for COVID-19 or they might have come in close contact with a coach who tested positive.

Paire is apprehensive that he might be forced to withdraw from the French Open after a doctor in France told him there was a higher probability of him testing positive when he arrives in Paris.