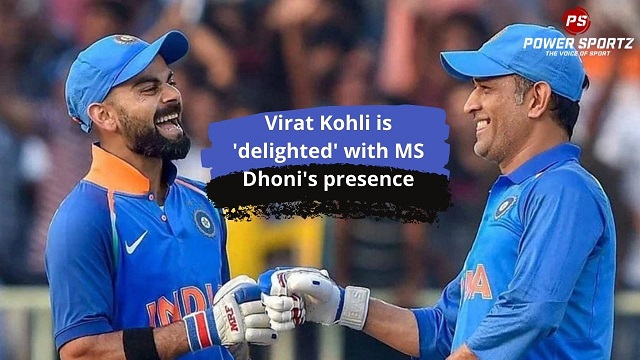 Virat Kohli affirmed that he feels ‘absolutely delighted’ that MS Dhoni is the Indian cricket team mentor for the World Cup. Captain Kohli stated that, “Younger guys who are playing their first major tournaments at early stages of career will benefit. His eye for intricate details and practical advice will help improve the game by one or two per cent.”

Furthermore, he said that Dhoni has always been a mentor for everyone in the Indian team; His presence has boosted the team’s “morale and confidence”. This could be seen through the performances of Shardul Thakur and Ruturaj Gaikwad for CSK in this IPL.

Despite, India performing well in the last few World Cups India have not managed to secure the title; The last time the men in blue won the tournament was in 2007 under Dhoni’s leadership. In the last T- 20 World Cup which was in 2016 India lost in the semi finals against West Indies; They went on to win the tournament by beating England in the finals. Both Dhoni and Virat Kohli will be determined to bring the cup back to India; This is because this will be last T-20 World Cup that Virat Kohli will be cptaining his side in. BCCI took this decision as they felt it is the right time that India appoints a younger captain to take the team forward.

India are the favourites to win the T- 20 World Cup

India are in ‘group 2’ of the ‘Super 12’; The other countries in the group are Afghanistan, New Zealand and Pakistan. ‘Group 1’ consist of countries such as Australia, England, South Africa and West Indies. Four other Countries will be added to these groups from the ‘group stage’ of this competition. Virat Kohli’s team will play their first match against Pakistan on the 24th of October at 7:30 pm IST.