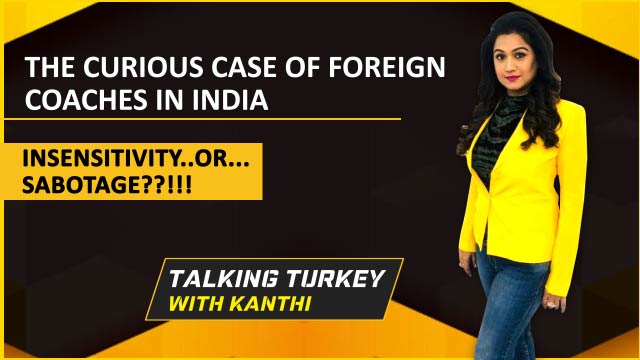 It is one of the perpetual woes for Indian athletes who want to train under a credible foreign coach as they can hardly complete their full tenure in the subcontinent, for some reason or the other. Foreign coaches, who always bring in their expertise and invaluable global exposure to the table, have a hard time acclimatizing to the complex Indian system.

So, what is it that compels foreign coaches to relinquish their posts and leave halfway? Is it the insecurities of the Indian coaches who connive with the system to scare the foreign coaches away? Or do the NSFs shortchange them once they land up in the country?

This is the topic of “Talking Turkey with Kanthi” this week, the flagship Power Sportz show. The curious case of the foreign coach is what the debate-show analyzed helmed by Kanthi D Suresh, who is also the Editor-in-chief of the channel. India is unusually harsh on foreign coaches, says Kanthi. Ironically, the nation parted ways with coaches who had delivered in terms of winning medals, she said.

There is not one, but a slew of reasons that prevent foreign coaches from discharging their duties and get home more medals. So, what are the causes that do not allow foreign coaches to settle down and go about their job? To know more, watch the full episode of Talking Turkey with Kanthi here.