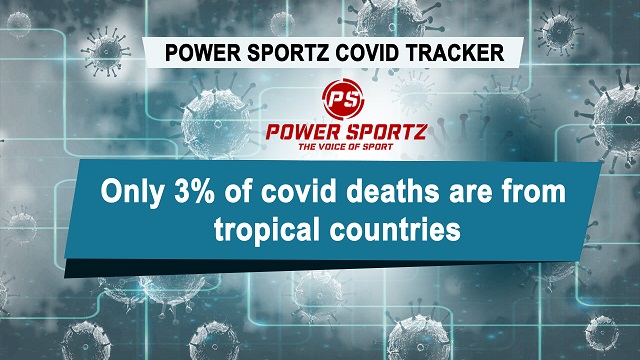 Many of the largest Corona outbreaks have been in regions where the weather is cooler, leading to speculation that the disease might begin to tail off with the arrival of summer. Many experts, however, have already cautioned against banking too much on the virus dying down over the summer. According to them, the virus that causes COVID-19 – which has been officially named SARS-CoV-2 – is too new to have any firm data on how cases will change with the seasons. The closely related Sars virus that spread in 2003 was contained quickly, meaning there is little information about how it was affected by the seasons. But an analysis of the data available till date has some startling revelations

COVID deaths  in Tropical Countries of the World as on April 6, 2020

Clearly the above trend does indicate the impact of climatic conditions on the virus, and could also be one of the main reasons for the low mortality rates in tropical temperature conditions which normally lie in a range above 18 degrees.

While there seems to be a demand for more and more testing from many in the Private  healthcare and pharma industry in India, where the costs of a test is capped at Rs 4500, It  remains to be seen if an already locked down country can bear the financial burden of testing, and the cost-benefit associated with it

The Ministry of Health has been analyzing the trends of the virus and has stated that the doubling rate at present is 4.1 days. But if the additional cases reported due to the Tablighi Jamaat event had not taken place, then the doubling rate would have been 7.4 days.

It would come as a better relief if the Ministry could engage more experts to analyze the impact of every rise in 2 degrees of temperature and its effect on the potency of the virus.

The larger question to be asked is whether the virus has already started mutating on account of the tropical climatic conditions and will it further lose its potency as the temperature increases. Will the Novel Corona Virus be reduced to the Seasonal flu, which thousands in India, experience every year! If so, does it make sense to escalate the panic more than the virus in the #IndiaFightsCorona challenge!