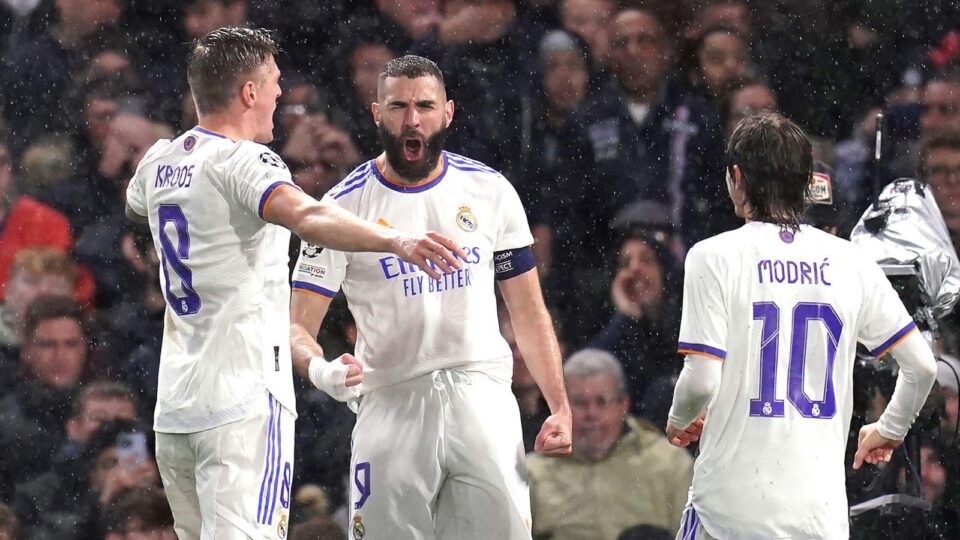 At a rain-soaked Stamford Bridge, Benzema scored two magnificent headers in three first-half minutes. Meanwhile, Kai Havertz grabbed a lifeline for Chelsea before half-time, only to be evaporated in the 2nd half. Thus, Edouard Mendy’s mistake paved the way for Benzema’s 3rd goal on Wednesday night.

With this, now Real Madrid have defeated the UCL holders in last 4 such encounters. In total now, Madrid have got the better off the UCL title holder for the 6th time, which is the most by any other team in the history of the competition.

Meanwhile, Chelsea have suffered back to back home defeats only for the 2nd time under Thomas Tuchel. While Benzema has now broken the record of scoring the maximum goals in a single European Competition in French history.

The Real Madrid striker has now scored 11 goals in the UCL this season leaving behind Fontaine’s 10-goal tally.

Thus, pressure is now on the Blues for a miraculous comeback at the Santiago Bernabéu in the return leg.

After the final whistle, Tuchel was understandably irritated, and he expressed his displeasure in a snippy post-match interview with BT Sport. The Blues boss said

“Well, what do you expect? To stand here and smile or what? Of course I am down,”

“We were not doing what we are used to do, it was far from our standards.”

“The first half was so far from any standards we set ourselves that we cannot complain when we lose like this.”

“Played well. Good control of the game, good build up from the back, dangerous counterattack. It was a good night but it is only the first half of this round,”.

On speaking about the 2nd leg Ancelotti said

“We have an advantage. We have to prepare for the next game in the league and then Tuesday will be another game. We have a lot of respect for this team who were the winners of the last Champions League. Next game, you never know.”

Now, Chelsea will travel to Santiago Bernabéu on 12th April in hopes of reducing a 2-goal deficit. The winner on aggregate will face one of or Atletico Madrid or Manchester City in the semi-final.