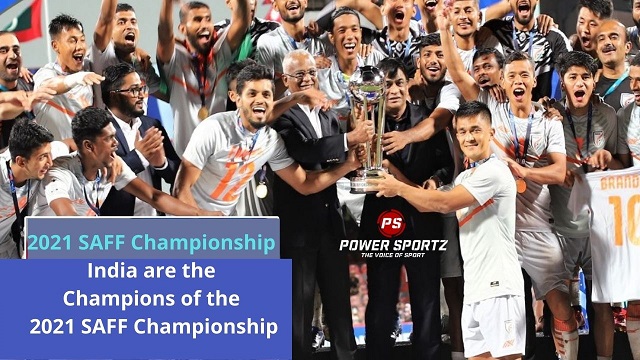 India beat Nepal by a scoreline of 3-0 and become the Champions of the 2021 SAFF Championship; Goals by Sunil Chhetri, Wangjam and Samad secure the win for the Indian’s. This is the 8th time they have won this tournament. Sunil Chhetri was awarded as the top goalscorer and the best player of the tournament; The experienced striker managed to score five goals in five matches. Additionally, Pritam Kotal recorded the most assists in the Championship.

The men in blue dominated the with 65% possession over the course of the game. They took 19 shots and 8 corners; Whereas, Nepal were only able to take 6 shots and weren’t awarded any corners.India’s defence were impeccable and helped their side win this match with ease. The champions will need to keep performing like this if they hope to progress as a footballing nation. Moreover, they will need to produce another superstar who can fill the void of Sunil Chhetri as he is retiring in a few years.

With continuous investment in the Indian Super League and the I League India have a great future ahead of them. This because these leagues are promoting the sport through the country and are enabling younger players to develop and learn from some of the best players in the world. However, this is expected to be a slow process which is bound to take a lot of time. It will need continuous flow of money and the facilities need to be improved all around the country.

It is expected that if India keep on improving their performances at the current rate they will be able to play in a World Cup in the near future. Moreover, some of the players will become talented enough to play in the best international leagues around the world.