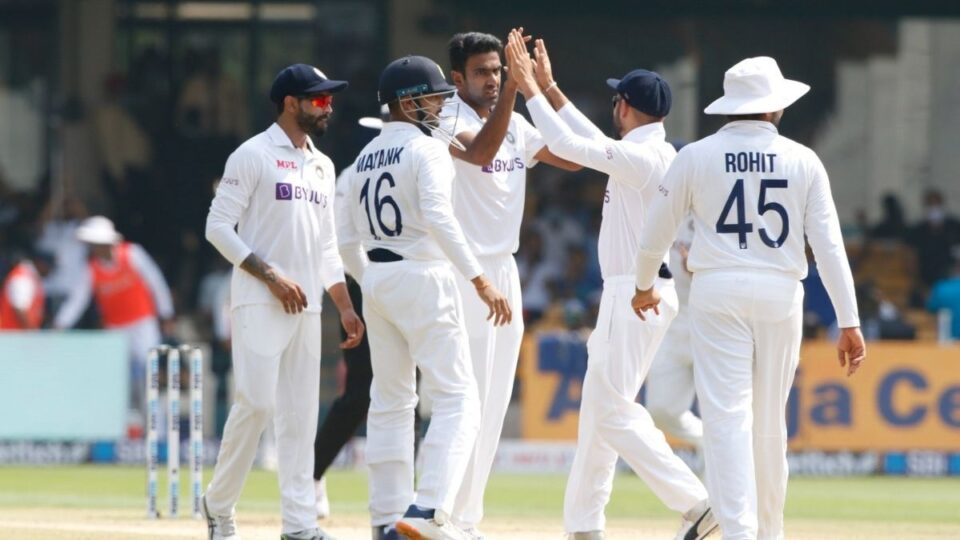 In the day-night Test in Bengaluru on Monday, India defeated Sri Lanka by 238 runs, clinching the series 2-0. The Indian bowlers knocked out Sri Lanka for 208, winning the game two days ahead of schedule despite a brilliant 107-run innings from the visiting skipper Dimuth Karunaratne.

On Sunday, Karunaratne bowled a brilliant 447-run inning. After Kusal Mendi’s dismissal, all eyes were on the skipper to see if the Indian bowlers could go through the Lions batting order.

Karunaratne hit 15 boundaries and reached his 14th Test century during his time at the crease. At the same time, he became only the third Sri Lankan captain to score a Test century in India, following Kumara Sangakarra and Dinesh Chandimal.

However, soon after, Sri Lanka’s captain was clean bowled by Jasprit Bumrah, and the Indian bowlers wrapped up the game in the next three overs. Thus, as a result, team India did a complete sweep over Lanka by winning the 2-match Test series by 2-0.

After winning the T20 series earlier by 3-0 and now again completing a clean sweep over the visitors, the Indian team captain Rohit Sharma said

“It’s been a good run, enjoyed it personally and as a team, there were so many things we wanted to achieve and I think we did.”

“The crowd coming back and celebrating with us has been so pleasing.”

The player of the match, Shreyas Iyer said

“I have always dreamt about playing Test cricket for India, good feeling to come and contribute, want to keep this going.”

The 27-year-old batted exceptionally well in both the Innings. Iyer scored 92 & 67 runs in the 1st and 2nd innings respectively, which was also the highest individual score by an Indian batsman in this match.

Meanwhile, Sri Lanka’s captain Dimuth Karunaratne was disappointed on not winning a single game in the series on the Indian turf. Karunaratne said

“I would have been more happier if we had won, but it was a tough one, we batted under lights and it was tough. But I have worked hard on my batting. We have a good team, the batting didn’t capitalize on these conditions, the bowling was good, but we kept bowling loose deliveries every now and then, that’s what we need to work on going further.”

Whats next for India & Sri Lanka?

Team India will welcome South Africa on their home soil for a 5 match T20 series. Soon after the 15th edition of IPL comes to an end, the Men in Blues will kick their new campaign on 9th June against the Proteas.

Meanwhile, as of now, no matches has been scheduled for the Sri Lankan team before the T20 World Cup later this year.