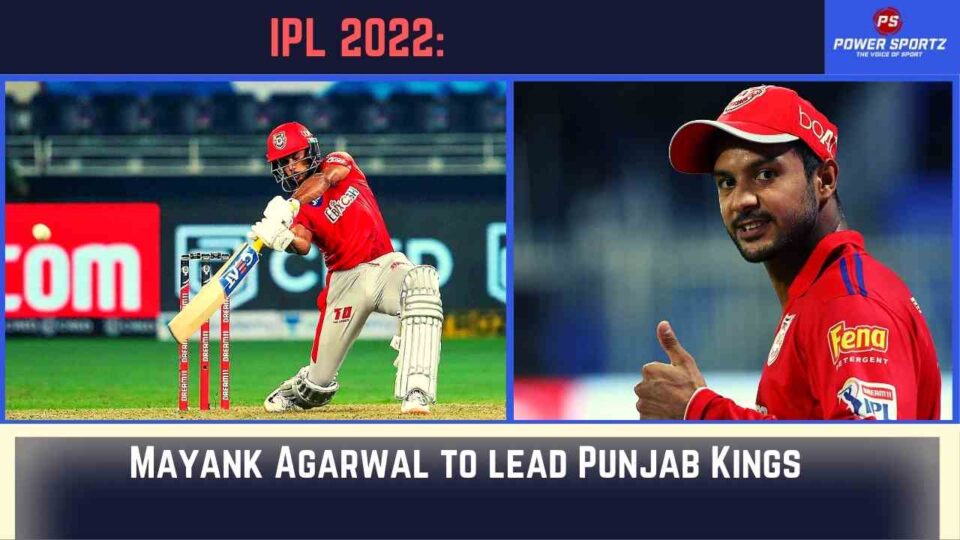 The 31-year-old Indian opener, Mayank Agarwal has now been appointed as the new captain for the IPL franchise Punjab Kings. He will be replacing KL Rahul for the skipper’s role, who has now made a switch to the newcomers Lucknow Super Giants.

The top-order Batsman is not new to this role. Mayank has previously served as the team’s captain in the last edition while Rahul was unable to play due to a certain injury. Moreover, the Bengaluru born boy was also being named as the vice-captain in the previous seasons. Plus, He has the experience that Punjab is looking for i.e. Mayank has now completed playing 100 IPL games.

In the century of games played by Agarwal, he has scored a total of 2131 runs with an average of 23.41 at a strike rate of 135.47. Keeping his highest score to be 106, Mayank has registered 11 half-centuries in his IPL career so far.

“Mayank has been an integral part of the side since 2018 and of the leadership group for the last two years. We want to create a strong foundation for the future with Mayank at the helm. He is hardworking, enthusiastic, a team player with all the attributes required of a leader.”

It will surely be an exciting Journey for Mayank as he looks to mould himself as the new captain of the team.

The Indian Batsman was a treat to watch in the IPL 2021 season as well. In the previous edition of the Indian Premier League, Manayk scored 441 runs with an amazing strike rate of 140.44. Moreover, playing 12 matches in his last IPL campaign, the opener maintained an Average of 40.09.

On being appointed as the new captain, Agarwal said

“I have been at Punjab Kings since 2018 and I take a lot of pride in representing this fantastic unit. I am delighted to be given the opportunity to lead the team.”

“We have some vastly experienced players in our ranks, along with many talented youngsters who are keen to grab the opportunity. I thank the team management for entrusting me with this new role of leading the side. I look forward to the new season and the new challenges it brings with it.”

Meanwhile, Punjab Kings are one of those few teams who are yet to lift the IPL trophy. The franchise will now be looking forward to winning their Maiden title under the new leadership. The Schedule is yet to be announced but the Rick-off for IPL 2022 is announced to take place from the 26th of march 2022.