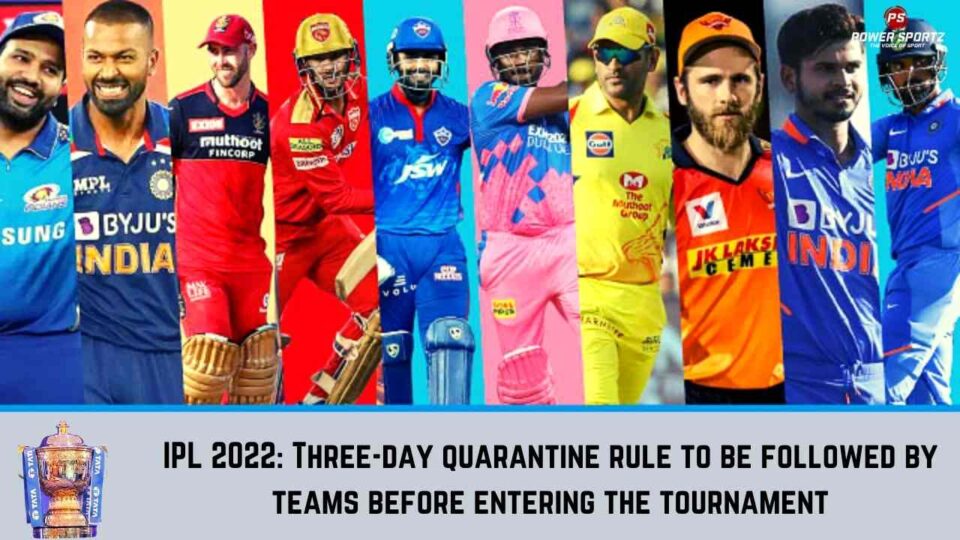 Before entering the IPL 2022 bubble, teams would have to go through a strict three-day quarantine period. This comes after the statement released by the governing bodies of the Indian Premier League.

Moreover, after the 3 days of isolation, all the members will go through a Covid test. If the test results turn out to be negative, only then will the match commence.

Apart from this, the teams will also be subjected to three RT-PCR tests during their quarantine period, followed by another 3 till day 6, with each test taking place 24 hours apart.

“After the completion of three days (72 hours) of quarantine, the test will be done on fourth day. Once the negative report comes, the participant can enter the bubble,”

That clause, however, would not apply to anyone entering the IPL from another bubble – bilateral series, franchise preparatory camp, domestic competition, national camp – as long as they commute by charter flight or by road. Several players will enter the IPL bubble after playing in bilateral series in March – April, notably India’s trip to Sri Lanka, Australia’s visit of Pakistan, England’s tour of the West Indies, and Bangladesh’s touring of South Africa.

As per the IPL protocol document

“If the teams are holding any camp prior to arrival in Mumbai, then the same quarantine protocols will apply,”

“While traveling to Mumbai, bubble to bubble transfer is possible by charter flights or road travel. Such that the bubble is maintained at all times. On arrival test will be done in Mumbai. And till the time results comes out the participants to be quarantined in their respective rooms. If the bubble to bubble transfer is not carried out or pre-camp quarantine as above is not done then on arrival in Mumbai, all the participants will have to undergo quarantine as per the protocols. There should be zero contact at the airport.”

All ten clubs are busy preparing for their own bubble as they begin their training camps. The majority of which will be held in Mumbai, where the majority of the league phase – 55 out of 70 matches – will take place. Surat and Ahmedabad will be used to train teams such as the Chennai Super Kings. The Titans will hold a brief training camp in Ahmedabad before going to Mumbai, where the IPL has set up multiple training venues. In addition to the three that will host the tournament – Wankhede Stadium, Brabourne Stadium, and DY Patil Sports Academy.