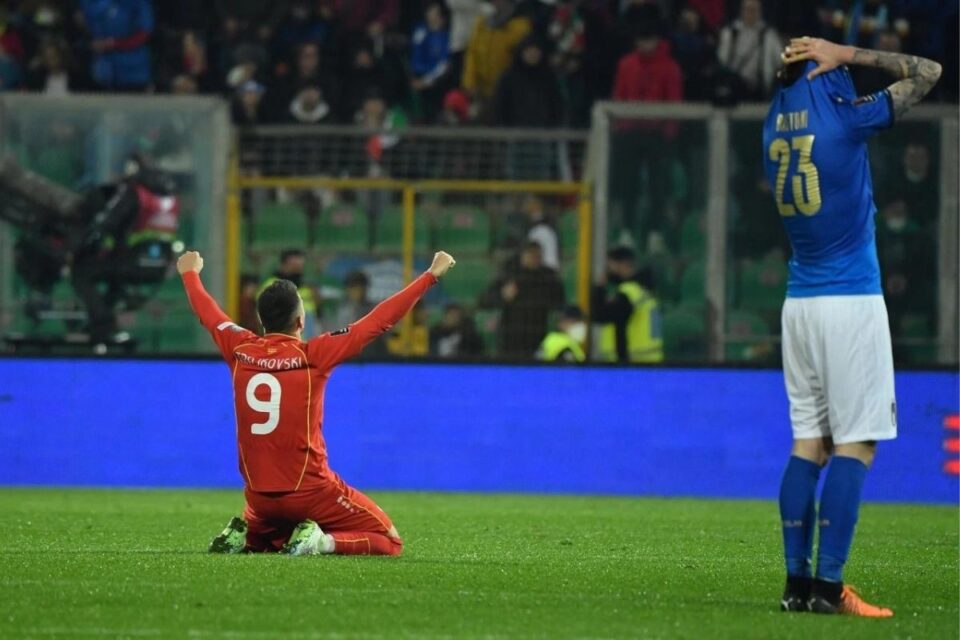 After a shock 1-0 loss at home to North Macedonia in their playoff semi-final on Thursday night, European champions Italy will not be involved in the 2022 World Cup.

Aleksandar Trajkovski scored a thrilling 92nd-minute goal for the visitors in Palermo, forcing the four-time world champions and current Euro 2020 holders to play Turkey, who were also knocked out by Portugal. Thus, the game between Turkey and Italy will now just be a consolation match as both are knocked out from the race to join the qualified teams at the Qatar World Cup.

The Azzurri also failed to qualify for the World Cup 2018 which was held in Russia. And now, they will not be a part of this year’s showpiece event as well. Thus, for the first time in the history of Italian football, The Azzurri have missed out on two successive World Cups.

Roberto Mancini was extremely disappointed with Italy’s loss, the manager of Italy said

“Just as the Euros was the most wonderful experience of my life, this was the biggest disappointment. We can say nothing, that is football, sometimes incredible things happen and it happened,”

“We shouldn’t have been here in the first place, but we did everything we could to win and it’s hard to even talk about it.”

When asked about his future, Mancini said

“We will see. I think everyone is too disappointed right now to talk about the future.”

Meanwhile, Portugal defeated Turkey by 3-1 in a comfortable victor to reach the Play-offs final.

North Macedonia will now prepare for a playoff final versus Portugal, which will take place on March 29. The Portuguese star Cristiano Ronaldo will be looking forward to qualifying in the 10th straight major tournament.

Portugal displayed a dominating performance against Turkey. But it wasn’t until the 15th minute when Otavio scored from close range after Bernardo Silva’s shot struck the post. Thereafter, the Portuguese side never really looked troubled.

The Liverpool forward Diogo Jota gave Portugal a 2-goal cushion at the brink of the half-time interval. However, Burak Yilmaz did cut the deficit to 1 goal for Turkey at the 65th-minute mark. But the game was eventually sealed at the stoppage time when Matheus Nunes struck Portugal’s 3rd.

Portugal have not failed to make their presence felt in a World Cup finals since 1998, having reached the round of 16 in two of their last three appearances, including last year, and will face North Macedonia on Tuesday for the chance to compete in this year’s tournament.

If Portugal defeats North Macedonia, Ronaldo will probably have the last chance to win the World Cup.