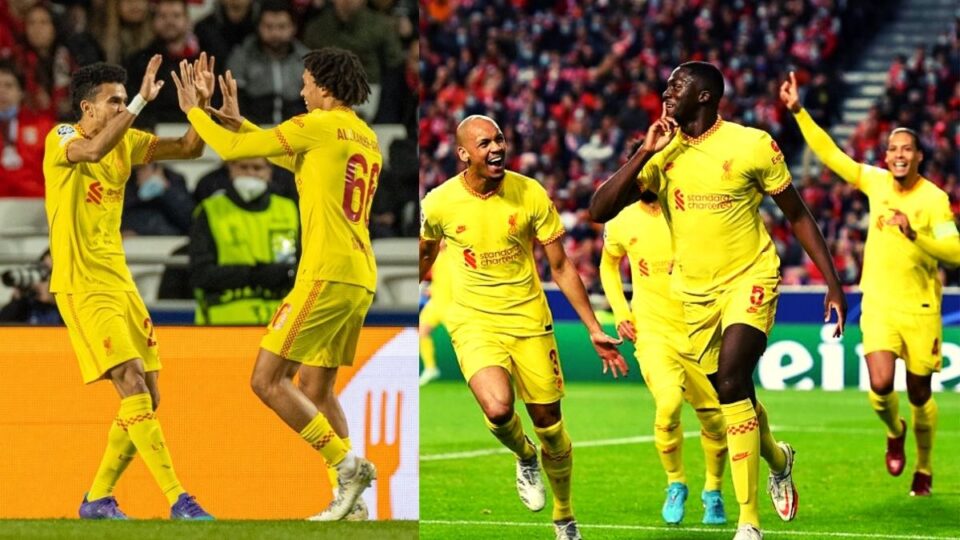 Liverpool battled Benfica to kick-off their quarterfinal campaign in the 2021/22 UEFA Champions League at Estádio do Sport Lisboa e Benfica.

The first game was the pinnacle of a two-half game. The first half was dominated by Liverpool, with Ibrahima Konate scoring his first goal for the club from a whipped Andy Robertson corner. Thereafter, a sublime ball from Trent found the head of Diaz, who unselfishly squared his header for Mane’s tap-in. After a spectacular counter-attack, Sadio Mane tapped home to cap off a solid first half.

The 2nd half saw Benfica providing more attacking threat and the game was soon back to only 1 goal separating the 2 sides.

A woefully attempted clearance from Konate in the middle of the box saw the Benfica striker presented with a golden chance.

A controversial VAR decision saw Nunez withhold from a penalty in the 67th minute as he was body-checked by Virgil van Dijk.

Liverpool soon began to regain a foothold in the match and Diaz summed up the game as 3-1.

With this, Liverpool have now defeated Benfica for the first time since October 1984 in a European competition. The Reds had lost the previous 3 fixtures against Benfica before yesterday’s night without even scoring a goal.

Liverpool have now won each of their last 8 away games in all competitions, their longest ever such winning run in history.

Klopp admitted that his team should have scored more goals than they did while praising Benfica, particularly goalkeeper Odysseas Vlachodimos. The Reds boss said

“I think everyone in the room agrees we could have scored more goals, maybe should have – but a big compliment to Benfica.

“Their best player was their goalkeeper, probably, that says a lot.”

“It’s half-time, two goals up. We were two goals up today at half-time and knew it was not over and it is the same information we have now.”

“Now they have to come to Anfield and we have to use that.”

The intensity of the matches will not abate anytime soon, and Klopp knows that using five substitutions would be especially beneficial. Klopp said

“Hopefully, at one point this discussion will stop about changing five times – it’s a necessity,”

“It’s April, we’ve had about 49 club games plus the games the boys played for their countries.”

“The boys have to dig deep and fight with all they have, but the more chances you have to share this intensity, the better it is for the players and the game.”

Thus, now Liverpool will be looking forward to the match of the Premier League 2021/22 as they lock horns with Manchester City on April 10.