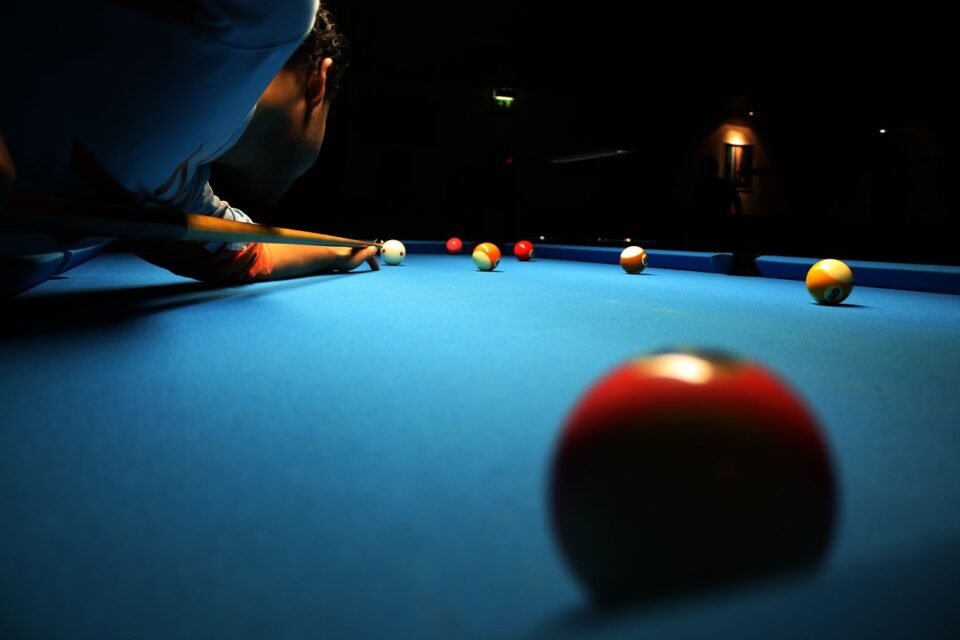 Snooker is a very unique and sophisticated game. For many people who are familiar with the rules and intricacies of pool, the more popular of these two cue games, snooker makes for quite the challenge to get into, for a few reasons. The difference in the rulesets is one of them, but snooker also requires far more skill and finesse compared to the traditional pool game you would normally play at a bar.

The snooker table is much bigger than a pool table, which is the first thing that makes this game much harder. In order to get the right amount of power and precision on your shots, you have to hit much harder, but also with much more focus, as there’s much more room for errors.

The cue balls are also different in snooker — they don’t have numbers and are organized by color, which also determines their worth in points. For example, pocketing a red ball is worth just one point, whereas getting a black one in the bot will grant you seven points. It is also important to note that you need to hit the balls in ascending order — you can’t move on to other colors before the red cue balls are all in the pots.

Whether you’re making the switch from pool to snooker or you simply want to improve your game, check out our professional tips that will help you hone your skills!

If you take a look at any snooker live stream, you’ll see that professionals like Ali Carter or Ronnie O’Sullivan are always getting at the ball square on. Peek at how these guys set their body before taking a shot and try to imitate it. The key is to be able to comfortably drop your shoulder and get as close to the shot as possible — that way, you’ll be able to hit more accurately.

Hampered cueing is the term for a particularly difficult shot obstructed by other balls or with your cue ball being too close to the edge of the table. You may deem it impossible to get across to your object ball when you face a situation like that, but there are a few ways of increasing your chances of a successful hit even when your cue is hampered. While there is no general trick that will help you deal with any and all obstructed shots, the key thing in these situations is to keep a cool head.

If you let stress get the better of you, you’ll inevitably play a bad shot and hand your opponent an easy hit. Think about the shot, weigh out the pros and cons of every approach, and make a decision that will be of most benefit to you. Remember that hampering cues is a part of the game — whenever possible, you should try and put your opponent in a difficult position, as well.

Aside from positioning, power, and accuracy, the timing of your hit plays into how good your shot is going to be, too. Once you get in position, pause right before your stroke and reassess it again. Finally, you should do the same right before you strike to make sure your chances of potting your object ball are optimized to the maximum. If you want to take that tip a step further, you can synchronize the pauses with your breathing — some players swear by this as the best focusing technique out there!

Take your time when optimizing your position. In this regard, snooker is a lot like chess, or even war — a careful analysis of your opponent’s strategy and a persistent, relentless approach will grant you opportunities to strike them down with the power of a lightning bolt.

Don’t Be Afraid to Reach for the Rest

Using the rest stick has become somewhat of a joke in the pool and snooker community. It is considered by some to be a sign of the lack of skill and a “get-out-of-jail” card for rookies who have gotten themselves into a hampered cue position. It is mostly amateur players who tend to scoff at those who use the rest sometimes. It has been used on many occasions by some of the masters of the sport, helping them on their way to winning big money tournaments. The rest is designed to be an extension of your arm to help you strike difficult or downright impossible shots. There is no shame in using it, and it can get you out of some really tricky spots!

The tips listed above aren’t going to make you win the World Snooker Championship, but they will bring you closer to competing against better opponents and understanding the game on a deeper level. Any cue sport demands a lot of thinking from the player, and without the right tactical acumen, you’re not going to become a snooker master anytime soon. You should also remember to stay focused and hone your skills with patience. You need to be persistent with your training and always keep an eye out for a tougher opponent, if you want to get to the top level.