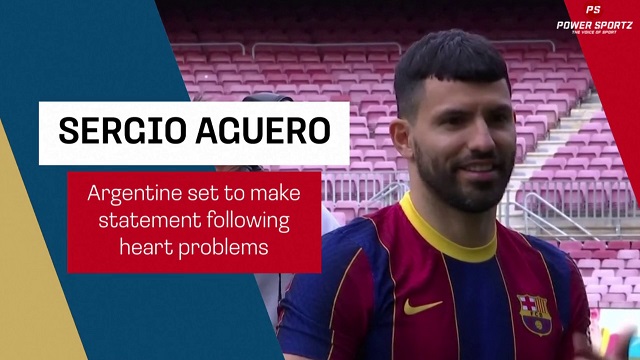 Aguero left the field on the 30th of October in a match against Alaves; as he was having a lot of pain in his chest. Ever since that game, the 33-year-old striker has not been able to feature in any games. This is because he was diagnosed with cardiac arrhythmia; thereafter the doctors around him had advised the superstar to stop playing as he isn’t fit. Sergio listen to the doctor’s advice and held a press conference to announce his retirement.

The press conference was full of emotions both the striker and members f the press had tears in their eyes; Aguero started the conference by stating “This conference is to communicate that I have decided to stop playing football.” He later expressed that “It is a very difficult moment. The decision I have made I have taken for my health; that is the main reason, because of the problem that I had a month-and-a-half ago. I was in good hands of the medical staff; who have done their best and have told me the best thing would be to stop playing.” Further, he concluded the conference by saying “So I made that decision about a week ago and I want to tell everyone I did everything possible to have hope, but there wasn’t very much.”

Aguero received a lot of love from his old club Manchester City!

The striker played in England for Manchester City for 10 years!; in these 10 years; he was able to help his side win five Premier League titles, one FA Cup title along with six League Cups. Furthermore, the sticker was able to establish himself as the fourth-highest scorer in the history of the Premier League by scoring 184 goals in 275 matches!

His old clubs Manchester City, his current club Barcelona and many other clubs from all around the world have been posting farewell messages from the striker. What do you think will be next for one of the best strikers that the Premier League has ever seen?