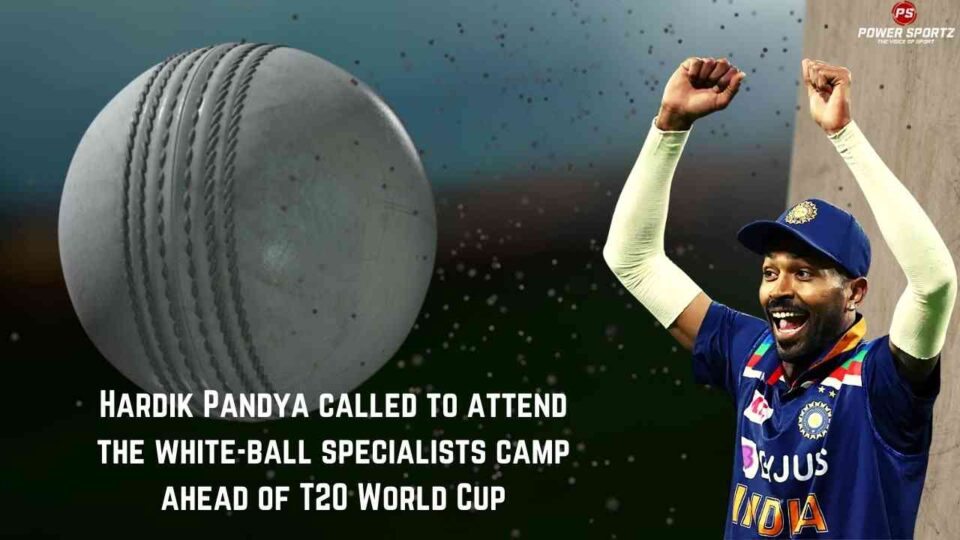 Hardik Pandya, who is missing from the white-ball cricket was called upon by the Indian team to attend a camp, which said to be only for the white-ball players.

Meanwhile, the camp is underway at the National Cricket Academy (NCA) in Bangalore from 5th March. The 28-year-old Baroda player, who was just named captain of the new Gujarat Titans side, has requested time to join the camp. In a few days, he is expected to be a part of it. However, Krunal Pandya, his brother, also an all-rounder, has not been asked to report.

It has since been revealed that the camp was convened in preparation for the October T20 World Cup, with Indian coach Rahul Dravid and selectors leading the charge. For roughly 25 of them, the player assembly appears to have been limited to white-ball specialists.

As per the sources, one of the officials confirmed saying

“Although the World Cup is more than six months away, planning can start now. The coaches and selectors want to assess the fitness of the players and take stock of things for the big event,”

In that scenario, Pandya’s presence is considered as an indication that he is part of the Indian team management’s plans and could be in contention for a spot in the World Cup. Moreover, if the injury-prone player survives the IPL, he is expected to be tried out in the home T20 series against South Africa in June.

Hardik Pandya previously appeared for India against Namibia on November 8, amid concerns about his fitness and ability to perform all-round duties, particularly bowling. In the World Cup, Pandya did bowl a few overs, but not with his typical flair and effectiveness. The 28-year-old will join the camp, according to multiple sources within BCCI.

Meanwhile, the 10-day camp has created a schism among Indian cricket’s numerous stakeholders. As several Indian Premier League (IPL) clubs expressing reservations to BCCI/IPL authorities. Their main complaint is that they were denied access to the players prior to the start of the season.

Moreover, The franchises have spoken with IPL chairman Brijesh Patel and CEO Hemang Amin about the situation.

Thus, the clubs are demanding access to their player before the start of the season so they can practice accordingly. While the 15th edition of IPL is all set to kick-off on the 26th of March. The fixtures are out and teams all already looking forward to it.

Meanwhile, Test players who are also involved in the IPL 2022 will join their respective teams, post Sri Lanka series. The Men in Blue have already won their 1st Test in a dominating manner. While they will now be looking forward to doing yet another clean swipe in the 2-match Test series. The 2nd Test is all set to take place at M. Chinnaswamy Stadium in Bangalore on 12th of March.