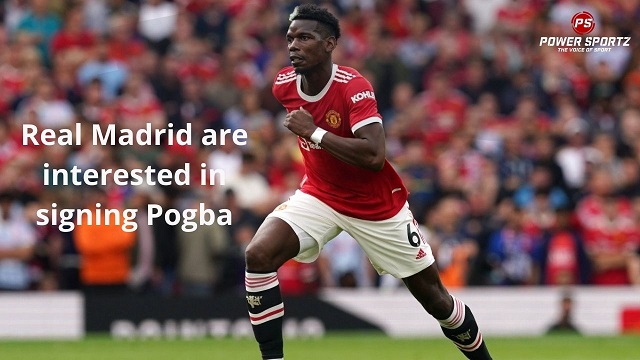 Real Madrid want to sign Paul Pogba from Manchester United; The Frenchman is yet to extend his contract with the Red Devils. Pogba’s contract is set to expire over the summer of 2022. Many clubs are hoping that he doesn’t extend his contract as they will get an opportunity to sign him as a free transfer. In addition to Real Madrid clubs such clubs such as Newcastle, PSG and Juventus have shown interest to sign the playmaker.

Pogba rejoined the English giants from Juventus in 2016 for 105 million euros; However, he has failed to help his side to win any silverware in the past few seasons. The last time United won a trophy was in 2016- 2017 season. This has caused a lot anguish amongst the fans of the Red Devils as they demand more from their club. Paul Pogba seems frustrated by the way his team has performed and is hesitant to sign a contract extension with the English giants.

However, this season seems different; After signing Cristiano Ronaldo this season have been exceptional and are contenders to win both the Premier League and Champions League this season. If his club continues to perform at this level the Pogba might choose to stay in England.

Real Madrid might use Paul Pogba to attract Kilyan Mbappe

Kilyan Mbappe is rumoured to be Real Madrid’s primary transfer target in the upcoming transfer window. Signing Paul Pogba might help them in attracting Mbappe as he has a great bond with the midfielder. The duo have been playing with each other in France and helped their country win the World Cup in 2018. If the Galacticos become successful in acquiring these players they will become one of the most difficult team to defeat.

Pogba could act as a replacement for players such as Luca Modric and Toni Kross who are set to retire over the next few seasons. It will be interesting to see what the playmaker decides to do ovee the course of the next few months.