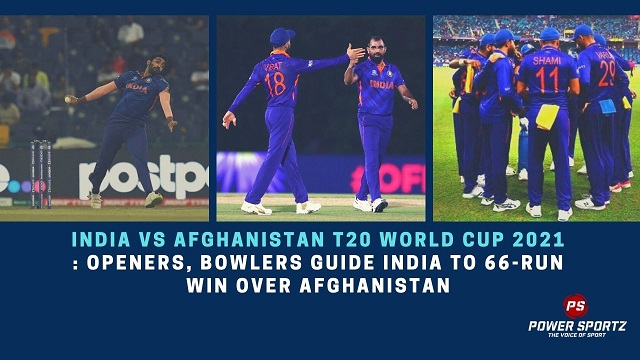 India is the third-best T20 country in the world; They entered this edition of the world cup as one of the strongest teams. Many experts around the world expected them to win the cup with ease; however, the 2007 world cup champions are struggling in the cup. Kholi’s side lost their first two group games in the tournament; they lost against both Pakistan and Afghanistan. India played Afghanistan in their third game of the cup.

Afghanistan is coming second in their group; out of their four matches they have managed to secure four points with a net run rate of 1.481. They secured their four points by winning two matches; Afghanistan beat Scotland by 130 runs; further, they beat Namibia by 62 runs. The losses they have recorded this season were against Pakistan by five wickets; In their latest game, they lost to India.

In the 33rd game of the T20 world cup; India has managed to defeat Afghanistan and record their first win in this edition of the cup. Nabi’s side won the toss and elected to bowl first; Kohli’s side was phenomenal and scored 210 runs for the loss in two wickets. The openers, K.L. Rahul scored 69 runs and Rohit Sharma scored 74 runs; further, Rishab Pant scored 27 runs and Pandya scored 35 runs to finish their countries innings. Only G. Nabi and K. Janat were the only two bowlers who took wickets.

Afghanistan lost the match by 66 runs as they lost 7 wickets in their innings; The highest scores for their side were Janat who scored 42 runs and Nabi who scored 35 runs. Indian bowlers dismantled their opposition top-order batting; Afghanistan’s top three batsmen scored 32 runs. Shami took three wickets for an economy of 8, and Ashwin managed to record an economy of 3.5 as he took two wickets. This win has taken India to the fourth position in the league.

Do you think they have any chance to qualify for the semifinals?