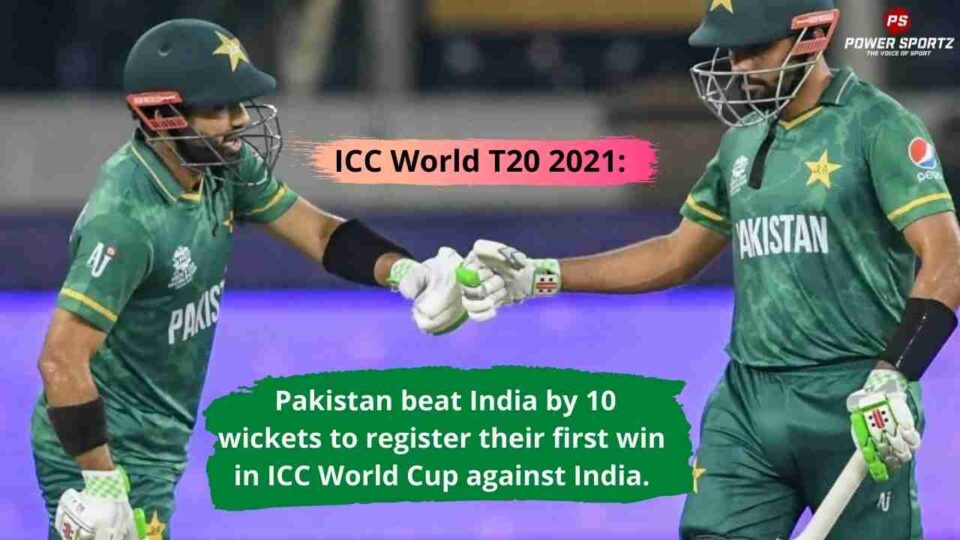 India has lost their first-ever T20 world cup match against Pakistan; They have played in the T20 world cup on five occasions previously. Pakistan lost in all five games previously; However, this time Babar Azam’s side has managed to beat their rivals. This match has taken Pakistan to the top of ‘group 2’; They will play against New Zealand in their next match which will take place on the 26th of October.

In the match between India and Pakistan; Mushtaq’s team won the toss and opted to bowl first. Shaheen Afridi shook the wickets of the Indian openers in the first two overs of his spell. Rohit Sharma got out without scoring any runs and KL Rahul scored 3 runs in 8 balls.

The duo of captain Kohli and Rishab Pant took the score from 31 for the loss of 3 wickets to 84 runs. However, after Pant was caught and bowled by Shadab for 39 runs; India struggled to add many runs for their team. Virat Kohli was the highest scorer for his country; He scored 57 runs in 49 deliveries. India ended their innings by putting up 151 runs for the loss of 7 wickets. Pakistan’s bowlers Hasan Ali took two wickets and registered an economy of 11 runs, lastly, Shadab Khan and Haris Rauf were able to take a wicket each.

Pakistan won the match by 10 wickets!

The second-highest ranked T20 batsmen Babar Azam and Mohammad Rizwan conquer India’s bowlers. The openers managed to chase down the target with 13 balls left. Ravi Shastri’s most economical bowler was Jadeja with an economy of 7 in his four-over spell. India’s fast bowlers were extremely disappointing; Bumrah conceded 22 runs in 3 overs, Bhuvneshwar Kumar conceded 25 runs in his 3 overs, and Shami yielded 43 runs in 3.5 overs.

India must move past this match and focus on the games of the tournament; They play New Zealand on the 31st of November at 7:30 pm IST.