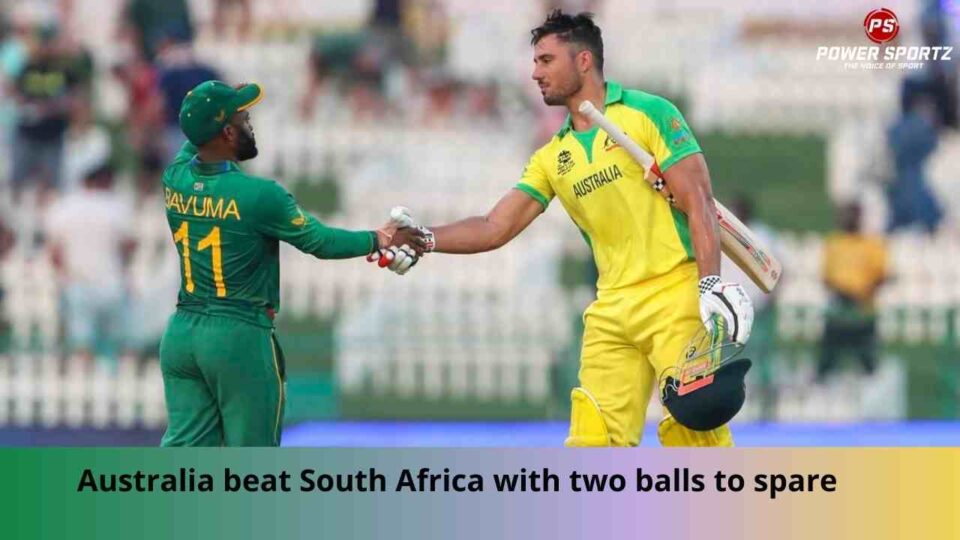 Australia has beaten South Africa in the first match of this year’s T20 world cup tournament. This was the first game of the ‘group 1’ division in the ‘super 12’ segment of the tournament. The other teams in their group are England, West Indies, Bangladesh, and Sri Lanka. Out of these six teams, the top two teams will progress to the next stage of the cup.

Aaron Finch’s side defeated South Africa by 5 wickets with two balls to spare in this match; Australia won the toss and elected to bowl first. The South African’s were unable to form a substantial partnership at the start of their innings; Captain Bavuma, Quinton de Kock, and R.van der Bussen lost wickets without adding sufficient runs for their side. This was because of the incredible spell of Josh Hazelwood. He was awarded the man of the match as he conceded only 19 runs and took up 2 wickets in his four-over spell.

However, later Adien Markram came in and helped his side by putting some valuable runs on the board. The 27-year-old was able to score 40 runs for his team; Despite this great effort none of his teammates were able to form a partnership with him. Temba’s men ended their innings by setting a target of 118 runs after losing 9 wickets.

Australia were able to chase the target and won the match

South African bowlers started the match in a vicious manner taking the wicket of captain Finch for no runs after facing five deliveries. Additionally, they took the wickets of David Warner and Mitchell Marsh putting the score to 38 for the loss of three wickets towards the start of the 8th over. However, this wasn’t enough to take the win from Australia as inform Steve Smith and Marcus Stonnis added 59 runs between them. Furthermore, a great knock by Matthew Wade helped lead his side to victory. in the second last ball of the game.

Do you think either of these teams will be able to win the World Cup?